In the sunlight, Calvin's hair is the color of redwood in rain. His skin is creamy and supple. A little crescent-shaped dimple appears at the corner of his mouth when he smiles and giggles. Gracing his cheeks, neck and arms is a sparse constellation of little dark specks, a half-dozen of them tossed as if seeds in a breeze. A larger freckle, the first of them to appear when he was little, adorns his left shoulder blade.

Our son is pure and sweet and vulnerable. His body, though awkwardly gangly, remains flawless. But his brain is messed-up, missing a significant amount of its white matter, so much that at fifteen he can't tell us of his miseries which, because of epilepsy and its treatments, are plenty. These are all reasons why it pains me so much when he gets hurt.

The other day Calvin fell while in the bathtub. From downstairs I heard the colossal splash, as if someone were doing a cannonball into a pool. In the past, I'd seen him kneel at the edge of the tub and try to stand, so I knew what had likely happened, but how? The nurse on duty had left the bathroom, however briefly I don't know—something I had allowed the nurses to quickly do to put his dirty clothing in his room down the hall and to grab his towel. While she was gone, Calvin must have tried to get out of the tub and then fell in the absence of someone there to help. By the time I got to the top of the stairs where the bathroom is, he began whimpering; that moment of silence between hurt and tears is so dreadfully gut-wrenching. The nurse and I had no idea what part of his body had been injured. The circular purplish bruises on his bony upper and lower hip did not show themselves to me until the next day's bath, when Calvin removed the rubber stopper and put the whole thing into his mouth.

As I write this I am keenly aware of the frown on my face—my furrowed brow, narrowed eyes and protruding bottom lip. I'm wincing with palpable heartache at my son's fragility and pain even now, days after the accident. I want to be there always to protect him. To break his fall. To prevent him from choking. To stop his seizureish fits. And though it's not humanly possible, I'll try with supermama vigilance nonetheless. 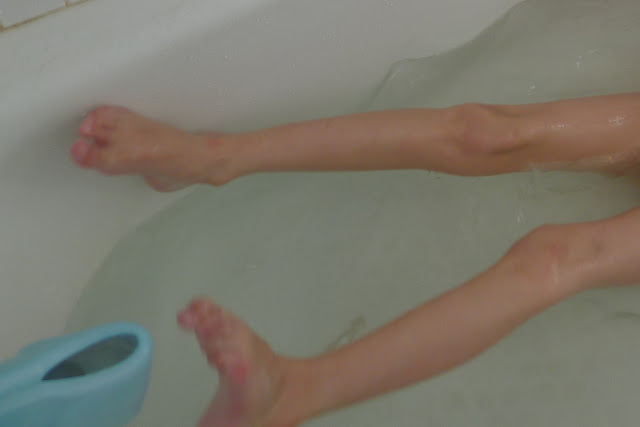