here and there and in-between

Tommy Orange. That's the name of the young Indigenous American who authored the novel I'm reading called There, There. I'm only a couple of chapters in, but already I'm engrossed with his artful storytelling of people and place. A native of Oakland, California, where his story unfolds, Orange references a quote by Gertrude Stein in which, on a return trip to her beloved Oakland forty-five years after first having left it, she describes with painful childhood nostalgia that "there is no there there."

Stein lamented that Oakland was no longer a place where a child “could have all anybody could want of joyous sweating, of rain and wind, of hunting, of cows and dogs and horses, of chopping wood, of making hay, of dreaming, of lying in a hollow all warm with the sun shining while the wind was howling.”

In Stein's mind and in reality, the place had changed, as all things inevitably do. But my sense is that modern Oakland's inhabitants, like the ones in Tommy Orange's novel, believe there remains much "there," there, though perhaps of a different kind.

I was reminded of Stein's quote when I read a meme a friend of a friend had posted on social media. The manifesto read:

You came here from there because you didn’t like there,

and now you want to change here to be like there.

We are not racist, phobic or anti what-ever-you-are,

here because it is not like there, wherever there was.

You are welcome here, but please stop trying to make here like there.

If you want here to be like there you should not have left there to come here,

and you are invited to leave here and

go back there at your earliest convenience.

The little blank box below the meme compelled me to comment. I first noted how ugly, poorly written, racist and xenophobic the manifesto is. I should've added that is it hypocritical. I protested the meme's perceived targeting of Black and Brown immigrants and refugees (Midcoast Maine is home to a growing number of African immigrants, particularly from Somalia). I went on to state that people come here fleeing war, famine, poverty, oppression, violence and genocide, not to seize this nation like its first colonizers did—settlers who sparked a bloody pogrom of its Indigenous. And I condemned the use of the term "what-ever-you-are" (tellingly, not "whoever-you-are") as a bigoted one.

The only constant is change, I said, the places in which we live in perpetual flux. I asserted that immigrants help us see the world through new eyes, challenging our assertions and our view of the status quo and, perhaps, encouraging us to see how we might become better people through love, compassion and charity for others who are different from ourselves. Diversity is strength, I added, variety the spice of life.

Regrettably, rather than engage in discourse, embellish, defend or concede their stance, the person who shared the meme blocked me. Initially I regretted that perhaps I'd been too harsh.

After posting my comment to the meme, I learned it had been defended as simply a remark to people moving here from nearby states. The argument seemed flimsy at best, duplicitous at worst, so I did an image search of the meme to see what more I could glean. I found American flags posted in the footers of the memes along with warnings such as, No amnesty! Go back to the shithole! Go back to Suckistan! These sentiments confirmed for me the meme's intended target: those who are far from your average Vermonter.

Pondering it further, and looking to Calvin and his disability to inform, I'm reminded of the ways in which some strangers gawk at him. I remember the way I felt—and sometimes still do even after living in Maine eighteen years—like such a foreigner here. It's in the way some folks are watchful and guarded, the way we—as adopted San Franciscans—don't always fit into the literal and figurative landscape which, in certain time and space, can be sober and conservative. I realize that, even if the meme-manifesto were speaking only to people from other states, it's still an unwelcoming, protectionist, hidebound dispatch. It still says, "Stay away!" and "You're not like us!" and "You're not welcome!" and "Go back to where you came from!"—each caution a far cry from the road sign staked in the shoulder of the turnpike upon entering Maine which says to residents and visitors, "Welcome Home."

And as I read and transcribed those postings, I recalled the same hateful rhetoric which spews and echoes from the White House. Those sentiments do not embody the America I love, nor the one I'm proud of. And I realize folks who isolate themselves, who are averse to change and who have qualms with others are fearful of the unfamiliar and unknown. But I'm grateful for this ever-changing nation, and of new neighbors from faraway places. I'm grateful for the here and the there and the in-between. 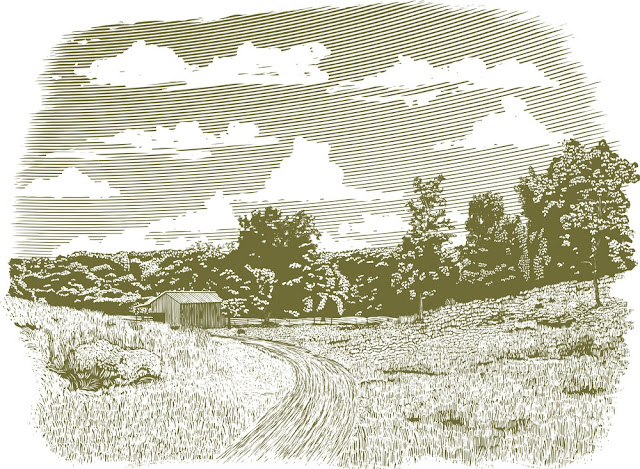