I don't often write about Smellie—aka Nellie, Smellers, Killer—beyond mentioning that I take her for long walks at the college athletic fields near our home. But I really should gas on about her more than I do. She brings us much needed joy and levity and, like Calvin, loves us unconditionally, something most of us in this world could use more.

Smellie, who doubles as a Muppet, makes us laugh. When she runs, her ears flop up and down like a bird taking flight. She resembles a lion when she stalks certain prey. She loves to be underfoot, insisting on forever positioning her head beneath our hands in order to be pet, and loiters anywhere that bits of food might drop. With her muzzle in our laps, she pokes our arms like a dolphin in attempts to be caressed, and nearly crawls out of her skin when we stop. With huge brown eyes that kind of remind me of my mother's, she gazes at me like a daughter.

Our pooch, a seventy-plus pound eight-year-old, is ridiculously soft, fluffy and adorable. She isn't much interested in other dogs and is indifferent to strangers when sniffing for scraps of food or licking up vomit left by last night's drunken students. She rolls in bird shit, eats deer scat, and pounces in the muddiest puddles. Once, she devoured a baby bird after dislodging it from its nest. Another time she caught a chipmunk, and just once, a squirrel, violently shaking them until their necks snapped, then dropping them to the ground where their lifeless bodies unfurled (sigh).

As for how Calvin and Smellie get along, well, they mostly ignore each other, neither getting from the other exactly what they want. Calvin doesn't feed Smellie save the crumbs that inevitably drop from his place at the table, and he doesn't touch her unless she is sitting next to him in the car. Smellie doesn't give him kisses or want him to pet her. She steers clear of his path rather than get trampled. Each of them would probably prefer our undivided attention as only children.

Mostly, Smellie's a wonderful companion who gets me outside for exercise come rain or come sub-freezing temps, snow and ice and wind when I'd otherwise be hunkering down indoors. When we play hide and seek, she finds me every time. She follows me everywhere I go. She's gentle, loyal, sweet, and attentive. She mostly comes when she's called, and never wanders, even when alone in our unfenced yard.

We love you, Smellie. How lucky we are to have found you when we did. Please stick around a bit longer. 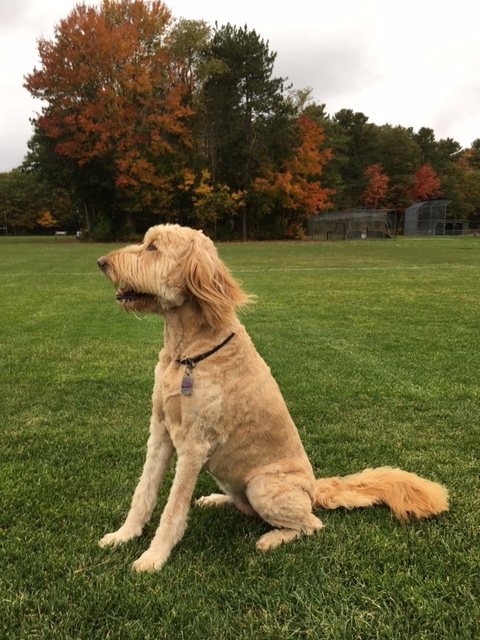 Posted by Christy Shake at 1:08 PM