Half-empty bottles of wine and spirits were strewn across a handful of countertops. Partygoers stood elbow to elbow, clad in their finest threads for a housewarming, and perhaps to celebrate the impending start of winter break. A few friends I hadn't seen in ages, others I'm sure I had run into just days before at the grocery store. In all, I bet I gave and got a hundred hugs or more amongst the gathering of wicked smart, humorous, well-informed, and compassionate people.

Midway through the evening I met someone new, a former student of the college. I began by telling her that my husband teaches photography there. Then, realizing how little that defines me, I went on to describe my role in taking care of a son who has significant disabilities—visual impairments, cerebral palsy, incontinence, wordlessness, seizures (rarely these days do I mention the apparel design career I had a lifetime ago.) The woman, who was accompanied by her mother-in-law, quickly realized she knew me. Excitedly, she mentioned that some years ago she had spoken to me on the phone inquiring about cannabis therapy for her older sister's epilepsy; the party's host, our mutual friend, had put her in touch with me. I strained to remember our conversation amid the scores of similar ones I've had with others over the years, mostly with parents of children with epilepsy. Eventually, it came back to me when she re-expressed her gratitude in speaking to another who has intimate personal experience (as opposed to most neurologists) with the torments and trials of profound disability and epilepsy.

My new friend went on to say that she'd read my blog. She told me that her sister had since passed away. She expressed interest in meeting Calvin. I had a nice, parallel conversation with her mother-in-law. We all embraced in solidarity.

For the remainder of the party I caught up with a number of my lovelies while Michael mingled with others. I came away from the evening with a warm glow of feeling so very loved. In one night I'd caught up with folks I hadn't seen in years. I got to know others, if only slightly, better. I made the acquaintance of a few. I set a long-overdue date with a favorite neighbor and friend. In my mind I even reminisced about my years designing apparel and how, though the work itself was challenging, rewarding, creative and fun, it was ultimately tarnished by vile hierarchies, bureaucracy and wicked internal power struggles of the corporate world.

The next morning, while sitting at my desk trying to eke out a word or two while Calvin had one of his curious meltdowns, I reflected on the previous night's engagement. I realized how different my life is than any I've lived before. I'm glad to be rid of the stresses of the corporate apparel world. And though I wish Calvin were a healthy child, I'm grateful for the chance to be his mother, for the challenge it represents, for the learning it affords, for the people I meet as the result of being his mother, and for his love and the love and communion of countless others, especially in the face of doing one of the hardest things I've ever done. 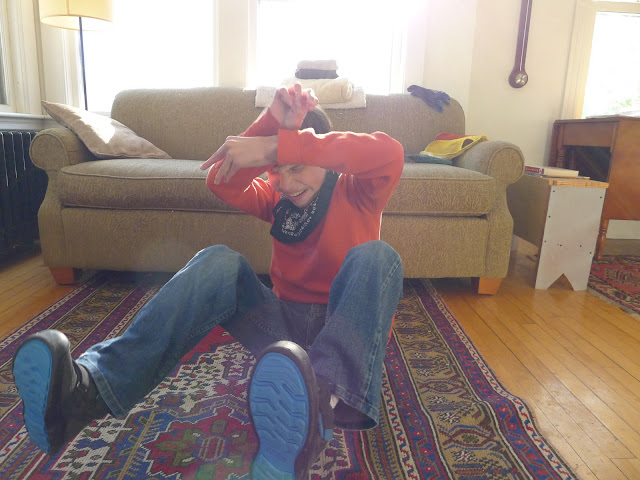