stuck at home nursing a stiff, achy back and a sick, feverish kid. outside the earth is parched. too little spring rain for trees and shrubs to drink. watching bits of a minneapolis murder trial while calvin sleeps.

seeing video of a white cop in a blue uniform pressing his knee into the neck of a black american for nine minutes sickens me. the black man cries out. says he can't breathe. what i can only imagine to be his urine streams from under a police vehicle, like when people seize. maybe it's the car's condensation. still, the fact that i even wonder matters.

bystanders plead with the officers to show mercy, but none of them is moved to acquiesce or aid george floyd, the man in distress. he is succumbing to their pressure. they remain an unmovable, emotionless threat. the white cop leans hard into the black american as if he doesn't matter. the victim's bloody face is ground into the asphalt, arms wrested, the intolerable burden of three big men leaning on his back and legs, his chest compressed. the knee in his neck shimmied into prime position for eternal silencing. the white cop indifferent to the pleas of his victim. contemptuous of onlookers. hands casually in his pockets as if jangling spare change. passing the time. as if nothing he does matters. callous as hell.

as with all things just and unjust, i think of my little boy calvin; he has no voice, is misunderstood and sometimes swept to the margins. goes unseen by many who avert their gaze or pretend he doesn't exist—to them he doesn't matter. he's different. easy for others to neglect. not in a position to help or defend himself. could easily get knelt on in the wrong circumstance. this makes me think of the boys and young men somewhat similar to calvin who have died under the weight and watch of those in uniform. autistic. misjudged. misunderstood. misapprehended. falsely feared. wrongly accused. bullied into final submission. insignificant. in some realms—because of their difference—they are thought of as mattering less and are treated as such.

this black american—and too many like him—was deprived of blood to his brain and oxygen to breathe, vitals denied by a public servant paid and sworn to protect. in broad daylight. witnessed by other beseeching human beings. captured on cell phone video. white mass shooters and dogs fair better.

words provoked by the bully in blue come to me:

the last five words make me consider calvin again. mostly, though, i think of countless dear friends with black daughters and sons. they have to give their kids the talk no parent of white kids does. the talk about being innocent and unarmed. of being suspected, feared, stalked, pulled over, apprehended, gunned down—even in their own homes—too often just because of the color of their skin. they tell their kids: do as you're told; be respectful. keep your hands visible; make no false moves. in this so-called liberated america, following these instructions can mean the difference between tasting oxygen or earth. black people know this. too many die while living it. the difference and indifference is sickening, malevolent, criminal.

at one a.m. calvin's fever spikes. he's restless, inconsolable. little can be done to ease his misery. we tend to him as best we can. crawling back into bed i hear the rain begin to fall. it's coming down sustained and heavy. a deluge. I wonder what would have happened if it had rained that day in minneapolis. wonder what the bloodless cops kneeling into george floyd would have done if the sky had opened up. 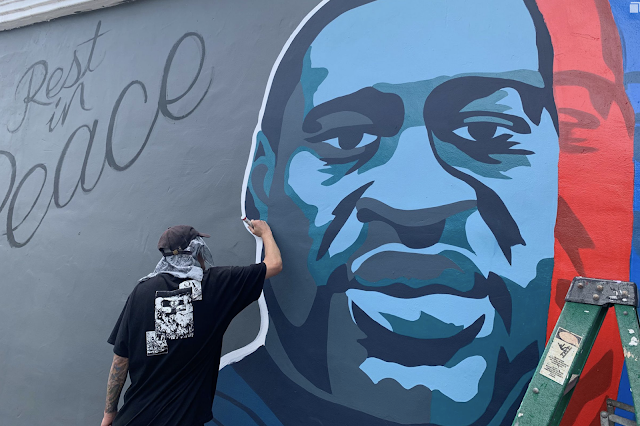