geek on the back roads

For the first time in what seems like weeks, I went for a run. The roads were clear of snow and ice, and Calvin was in school. It was only thirteen degrees, and I'd never jogged in such cold, but when one lives in Maine and wants to run outdoors, there isn't much of a choice. Luckily, though the air felt damp, it was mostly still. I suited up, then headed out to my beloved Pennellville and parked the car near the point at the side of the road. Right out of the gate, Smellie took off and ran amok, zigzagging from one side of the road to the other, sniffing whatever there is to smell when everything is frozen. When we passed one of two dog walkers, just to be considerate (because Smellie is the mellowist dog in the world unless you're a tennis ball, chipmunk or squirrel), I clipped her on the leash and she trotted alongside me quite well. I jogged on the smooth, flat roads at a steady pace, feeling light and lithe and kind of cool (groovy, not chilled) despite the fact I was clad in mixed layers and looked like a total geek: big, boxy, patched-up, dirty, drab, puffy jacket; dingy-white, stretched-out, high-water joggers; long, black leggings underneath; bright teal sneakers. At least the chunky wool hat Meggan knit me looked good. But I stayed warm, even my hands, which were gloved, fisted, and drawn into tattered, apish sleeves.

Nearing the halfway point, I ran into my friend Lauren walking her dog. I stopped to give her a big, long-overdue hug, making sure to exhale away from her face, because—you know—Omicron. We chatted for a bit and vowed to somehow get together soon for a homemade cocktail, then I took off again.

Twice along the way I stopped briefly to take a couple of photos before my phone crapped out in the cold. I've not often seen the early(ish)-morning sky at Pennellville, and today—not unlike every day I visit there—the scenery didn't disappoint. On my way out, clouds spread across the sky in a way that was wonderfully moody, both in color and how they dissolved into each other as if watercolor or smoke. On my way back, I watched a sliver of lemon sunshine squeeze itself through a gap in the eastern horizon. Not surprisingly, it looked and felt sublime.

In all, I went four miles, which is no big deal, but I'm thankful I could do it at all (I hope to perhaps run this summer's Beach to Beacon 10K, if I'm lucky.) As for Smellie, well, considering she's nearly eleven, her performance was amazing. Perhaps most noteworthy is that I didn't worry or think about Calvin even once until my cell phone failed on the way back, and even then I wasn't too bothered since he had had a decent morning and is in good hands at school.

At home now, Smellie is totally conked out. I'm here writing, my feet up on the green couch, listening to music and feeling the warm afterglow of a good workout, plus a slight high some attribute to endorphins while others believe might be endocanabbinoids. It has been seven days since Calvin's last seizure, which isn't very long, but it's better than three consecutive days of the terrible cluster-you-know-whats. Michael will be home soon with groceries. I've just put a fire in the stove. A small glass of red wine is imminent, and I'm already looking forward to tomorrow morning, which is when I've planned another running date with Pennellville. 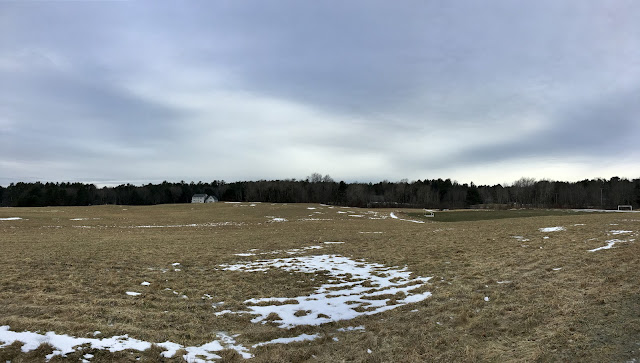 Posted by Christy Shake at 4:34 PM