My eighty-two year old mother has Alzheimer’s. It’s unclear how long she’s lived with it, though she’s always had a bit of a poor memory. Since I can remember she had a bad habit of misplacing things, though at the time I figured that—what with raising six kids—it might have been due to the fact that she simply had too much on her mind. In any case she started taking medicine for Alzheimer’s about eleven years ago and she has been on the slow burn ever since.

During my recent visit to see her more evidence of that slow burn emerged. At one point, while looking through a photo book of a trip she took with my sister and me, I pointed to a snapshot of Caron and said, “Who’s that?” Mom replied in a most unsure fashion, “Soup?”

On one of my last days in San Diego we sat on a park bench overlooking the bay as seals and an occasional pelican floated by. In the span of several minutes Mom asked me how I’d met my husband Michael every ten or fifteen seconds. It became clear to me that her window of short-term memory, which in recent years has seemed as long as five or ten minutes, has gradually shrunken to little more than a blink. But she understood that I had come a long way to visit, that I was leaving soon and she told me often how much she was going to miss me. We held each others hand while admiring the low sun’s golden light reflecting off of the San Diego skyline and I wondered if this would be the last time she’d remember knowing me, if indeed I’d see her again.

There were times during my visit when I was reminded of how similar Mom’s memory is to Calvin’s, neither one of them very good; Mom’s because of a web of plaque build-up in her brain and Calvin’s due to the battering of seizures and the constant brain-bath of mind-numbing drugs. Both Mom and Calvin need to be reminded what to do when and what not to do. Like Calvin, Mom has to be told a million times not to do something even though she’ll be right back at it a few seconds later. Reminding her often is imperative if you’re trying to thwart a dangerous or unhealthy behavior, like eating pebbles or scratching sores into her skin, but appears totally in vain (and begins to feel something like self-flagellation) when aimed at more benign conduct. Sadly, it seems we can’t teach this old mama dog new tricks anymore, not with a brain like a sieve.

I remember when my dad moved my grandma from her Pendleton, Oregon home of fifty-plus years to a small room in one of our local nursing homes. She was ninety years old and had begun leaving her refrigerator door open, eating only half of her Meals On Wheels (saving the other half for the next day even though the meals were delivered daily) and soiling her undergarments, which she’d simply throw into a reeking pile in the basement. Dad used to drill her and get angry when she didn’t remember something, figured he could discipline her into remembering, thought it was a matter of will power or effort. I tried telling him that her brain was beyond the point of resilience or absorption, but his nagging her persisted and I could see the result in her sorry, confused expression as well as the tension in his own face. It made me sad.

A few years ago I heard of a study on Alzheimer’s patients. One group was shown a sad film, the other a happy one. The patients didn’t remember having watched the movies but the group who’d viewed the sad film felt sorrowful for a time and the others who had seen the happy film had residual feelings of joy. Neither groups’ individuals could identify why they felt the way that they did but it was clear that, though the memory of the films themselves had faded, the emotions they had sparked remained for hours. I think about that study whenever I get frustrated with my mom’s sometimes perturbing, repetitive behavior and, instead of snapping at her, I try to speak to her lovingly, kindly, patiently. Though paramount, at times it's not always easy—it takes effort—but it becomes more natural with practice and feels so much better to both of us.

I catch myself in similar situations with Calvin sometimes, such as telling him not to scream at the top of his lungs when he is obviously drowning in drug-induced mania. I make myself sick barking curt, angry words meant to derail his irritating behavior, yet to no avail. Instead, I end up more vexed—ugly—than if I simply tried, as Michael suggests, to let it bounce off of me like water off of a duck’s back. Recently, I’ve tried Michael's tactic and most of the time it works, producing a happier Calvin, a way more relaxed me, and a beloved dog that doesn’t have to shiver and sulk into the next room thinking he’s the one being scolded. All in all it means more carefree minds and bodies, less gray hair, fewer scowling wrinkles and much improved feng shui for this crazy old Kolster-Shake shack. 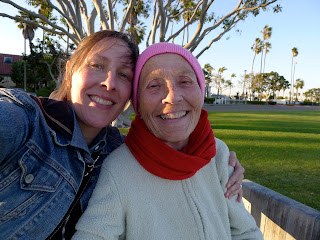