Last night I dreamt of Calvin, which isn't unusual. In most of my dreams of him, however, he is having a bad seizure. I know I dream in color because in these dreams I can see that his hair is auburn, his eyes are indigo and his face is ashen gray-blue. Thankfully, I wake up from these dreams as they are as distressing as the real thing.

But last night's dream was different. The three of us were on holiday together, which in reality has happened only once in over four years. In the dream Calvin had fallen and banged his mouth. When I heard him cry out I came running. I asked him what hurt and with tears in his eyes he pointed to his pouting mouth and tried his best to utter words to me.

I know that to some this dream may seem kind of sad, but to me it is full of hope. Maybe it is some sort of window into the future. You see, if Calvin could learn to point deliberately everything would change. Pointing is a foundation of language. If only he could communicate his needs and desires, or be able to tell us what hurts. We'd know if he has a headache, if he has a tummy ache, if he has a toothache, a twisted ankle, an ear ache, if he bit his tongue or stubbed his toe. He might even be able to tell us that he is hungry or tired or has to go to the bathroom. Without language or any expressive communication besides crying, rubbing his head and eyes or reaching for us, we are left guessing about what might be troubling our boy. Most regrettably, Calvin's continued seizures and the need for powerful medicines intended to thwart them—while not completely successful—greatly limit Calvin's ability to develop, including language.

When I was pregnant with Calvin I dreamt that he was born chattering. I still believe in my heart that one day, hopefully soon, I will hear him say that most precious word, Mama. 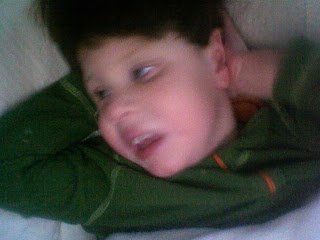 Posted by Christy Shake at 1:03 PM