I think about losing Calvin a lot—probably every day. His intractable epilepsy makes the possibility of sudden death much more likely. And while the thought is not a very nice one it also serves to remind me to cherish my time with Calvin and to appreciate all of the wonderful ways he continues to enrich my life. Because of Calvin I often think more deeply about the loss that others suffer.

For years, some dear friends of ours yearned to have a child. The couple tried everything to get pregnant but met only with repeated disappointment. Finally, they turned to the world of foster care and one special day they brought home a beautiful baby girl, just days old, whose biological mother could not care for her. The joyous couple loved the new addition to their family. They delighted in feeding her, clothing her and doting on her for eight glorious months. As a result she was a very happy child who returned her parents' love in abundance; it was clear in the way she was gleefully mesmerized by them. But then one day, what had felt like some magnificent dream, in a millisecond became their worst torment; some blood relatives of the child, who had previously declined taking her in, changed their minds. The state swooped in and snatched the baby from their arms—the only mother and father the child had ever known—and drove off, depriving her of ever again seeing her parents smiling faces, hearing their soothing voices or feeling their loving embraces.

Still, I am moved to tears when I see photographs of the three of them together. I can never fully know their pain, nor the child's trauma, but I feel the stab of their sorrow. I know loss. It has weighed so heavily on me at times it has been difficult to breath. It has strangled my heart. But the loss of a child, I believe, is immeasurable and in no way can it be imagined.

Life can be unpredictable. It can turn upside down in a split second and become something utterly unrecognizable. It is impossible to equip oneself for this kind of tragedy and suffering. The only thing to do is to persevere, to love as much as possible from day to day and to appreciate all of the wonderful things that life has to offer, especially in case they disappear.

Please share Calvin's story with the world and help bring us one step closer to a cure for epilepsy.
Give to epilepsy research: http://www.calvinscure.com 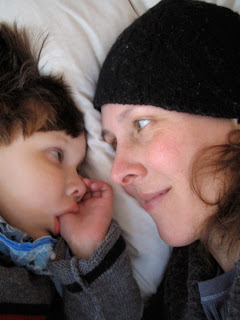