In autumn of 2010 when I was on an Alaskan cruise with my sister and my 81 year old mother, who suffers from Alzheimer’s, I met another octogenarian and her husband. I had joined her during the busy breakfast rush, since there were no open tables left, and we talked and talked until her husband arrived and then the three of us talked some more.

We made such a nice connection, joking, laughing, sharing witticisms and hugging, and we have kept in touch. The other day she wrote telling me more about herself. She sent me one of her poems and talked about her writing group. She told me that in the spring she and her husband were going to be great-grandparents for a second time, and she went on to say:


As I write, I realize this may be a hard kind of news for you to read, and I almost deleted it. But then I decided I should leave it there because it is part of life, and you are forced to be a realist.

It is true, having a severely disabled child changes the course of one’s life in ways unimaginable until it happens. I find myself drifting off and dreaming of what the future might bring, and what it won’t. Of course there’s what seems obvious: Calvin won’t be going to college, may never have a job and most likely won't be able to live independently. It’s not even clear if he will ever be able to speak any words or communicate in some other fashion. And though I continue to have high expectations that he will walk by himself, I was certain he would have learned by now (I have no doubt that the anticonvulsant drugs, as much as the seizures themselves, have prevented him from meeting this milestone.) I realize that a serious relationship is improbable, if not impossible, for him and in any event not one that might produce offspring. What I worry about more, however, is Calvin simply getting the essential human touch—particularly in my absence—that all of us need as children and as adults. And yes, I have accepted the truth—but not without great sorrow—that I will never know the joy of being a grandparent.

But, as my dear friend said—and I am glad she didn’t delete it—it is a part of life, and I must deal with the cards that I have been dealt. So I change course—shift gears—to a slower, meandering, hilly path where the steep grades are difficult, though at times I can coast. This path of mine is obscure at times and holds surprise, both delightful and frightening, around every curve. But it is my path, and I’ll follow it, hand and hand with Calvin, with curiosity and wonderment until we meet the end.

A version of this post was published in December 2010.

You'd be amazed at what just one share of Calvin's story can do for epilepsy awareness. Please do.
Give to cure epilepsy: http://www.calvinscure.com 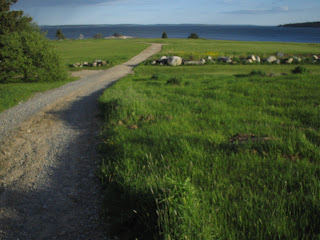