One very cold night several weeks ago, while brushing my teeth, I was blankly regarding the surfaces in our bathroom, as one does in a crowded elevator, just passing the time as minty foam filled my mouth. I noticed some cracks in the thick paint on the back of the door, too many brown dog hairs littering the white tile floor and a speckled red ladybug crawling on the wall just above the sink.

The next day while I was taking a shower there she was again, tracing circles on what seemed to me an expansive plane for such a tiny creature. The bug trekked in a crescent, stopped for a second then resumed only to end up in the same place she had started on the flat, sweating wall. After a brief rest she repeated her loop a second and third time. The next day I found her upside down on the window sill.

This helpless, lost bug reminded me of Calvin and the infinite loops he seems to be making. These loops consist of large, concentric circles, the outer describing his development and activity over the course of years and the inner more literally characterizing his behavior in a given moment.

Calvin, who is eight, is engaging in virtually the same things as when he was three. He still loves playing with the wooden shutters in the bathroom, his passion for banging the kitchen cupboard doors has not waned and he continues to delight in bouncing and spinning in his industrial strength johnny-jump-up.

His inner loop is more literal. For instance, when Calvin is playing in the bathroom he rattles and mouths the shutters for a spell, turns and bangs on the toilet lid like a drum (we keep it down), triangulates to the sink and yanks on the edge as if it will open like the freezer, then pivots back to the shutters to start the cycle over again. Calvin will delight and engage in this repetitive cycle for a while, not unlike the ladybug on the wall, getting nowhere.

But, we indulge Calvin in his whims and fetishes in spite of its monotony because, after all, he is practicing his balance and coordination and he greatly enjoys these antics. And in our boredom and tedium, it gives us a chance to daydream and perhaps to discover and study beautiful things like ladybugs.

Please share Calvin's story and help bring us one step closer to a cure for epilepsy.
Give to epilepsy research: http://www.calvinscure.com 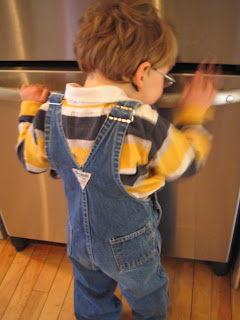 Posted by Christy Shake at 3:36 PM