Four-plus ounces of liquid gold sit in an amber jar on the kitchen counter waiting for me to purchase a glass dropper so I can give Calvin his first dose tonight. It took a week to make what I jokingly told a friend was liquid reefer, though what I'll be lovingly referring to as cannabis oil. The oil isn't anything like reefer, in that it won't get Calvin high since it hasn't been heated in the making. It's basically cannabis in the raw and will pass through Calvin's digestive system, then into his brain, spreading its anti-inflammatory, immune-boosting, neuroprotective and anticonvulsant properties.

One ounce of dried, cured cannabis bud dissolved into eight ounces of organic grain alcohol, then strained and evaporated, produced 4.3 grams of resin to which we added oil. We have no idea how long the medicine will last or if it will even work to stave off Calvin's seizures. We'll begin giving Calvin one drop twice daily, slowly increasing by drops until we see the desired effect of fewer seizures, which could take quite a while since Calvin's seizures appear to us only weekly.

Last Friday, I was reading and writing about clobazam while crying into my lap. A knock came at the door. I walked toward a man standing on the other side of the glass who I simultaneously did and didn't recognize. Where a hat usually perched, his head was shaved bald, and a sports coat replaced his typical, casual fleece. Unmistakable, though, were his strong jaw and deeply cleft chin. When I opened the door we embraced as if twins and, holding my breath, any tears I had left in me fell.

It had been at least four years since we'd last seen each other, nearly as long since we'd spoken, so long that I'd almost forgotten how much I missed Nick. He'd been one of those rare students of Michael's who'd kept in touch, grown to love us, hung out more than just once in a while. He'd given Calvin one of his most favorite toys, an orange plastic football. Over the years we'd spent hours together making meals, shooting the shit, exercising our quick wit. We'd grown very fond of each other before he slowly melted away, then seemed to disappear altogether.

When Michael arrived after a day of shooting he hugged Nick big and strong like a brother, and the three of us whiled away the time catching up, joking, drinking bourbon, watching tincture evaporate into resin, eating Indian chicken and ginger cake with hard sauce. His surprise appearance and presence seemed to me like a very good omen.

Today, Nick is gone. Outside, the temp hovers just above freezing. In the sun, snow is melting and the rhododendrons relax broad-leafed and accepting. I can sense that spring is near, and it seems right that we'll be giving Calvin this herbal extract, this cannabis oil, with the emergence of longer, warmer days.Yesterday, as Nick was leaving, we heard a cardinal chirp. I swear I can sense the crocuses pushing up through the ground beneath the snow. This has been a brutally long, cold, snowy winter, but I feel the ice is thinning, hear the cars splashing through puddles in the street, and I can smell aromatic liquid gold on my fingertips like pine sap, honey and sage. 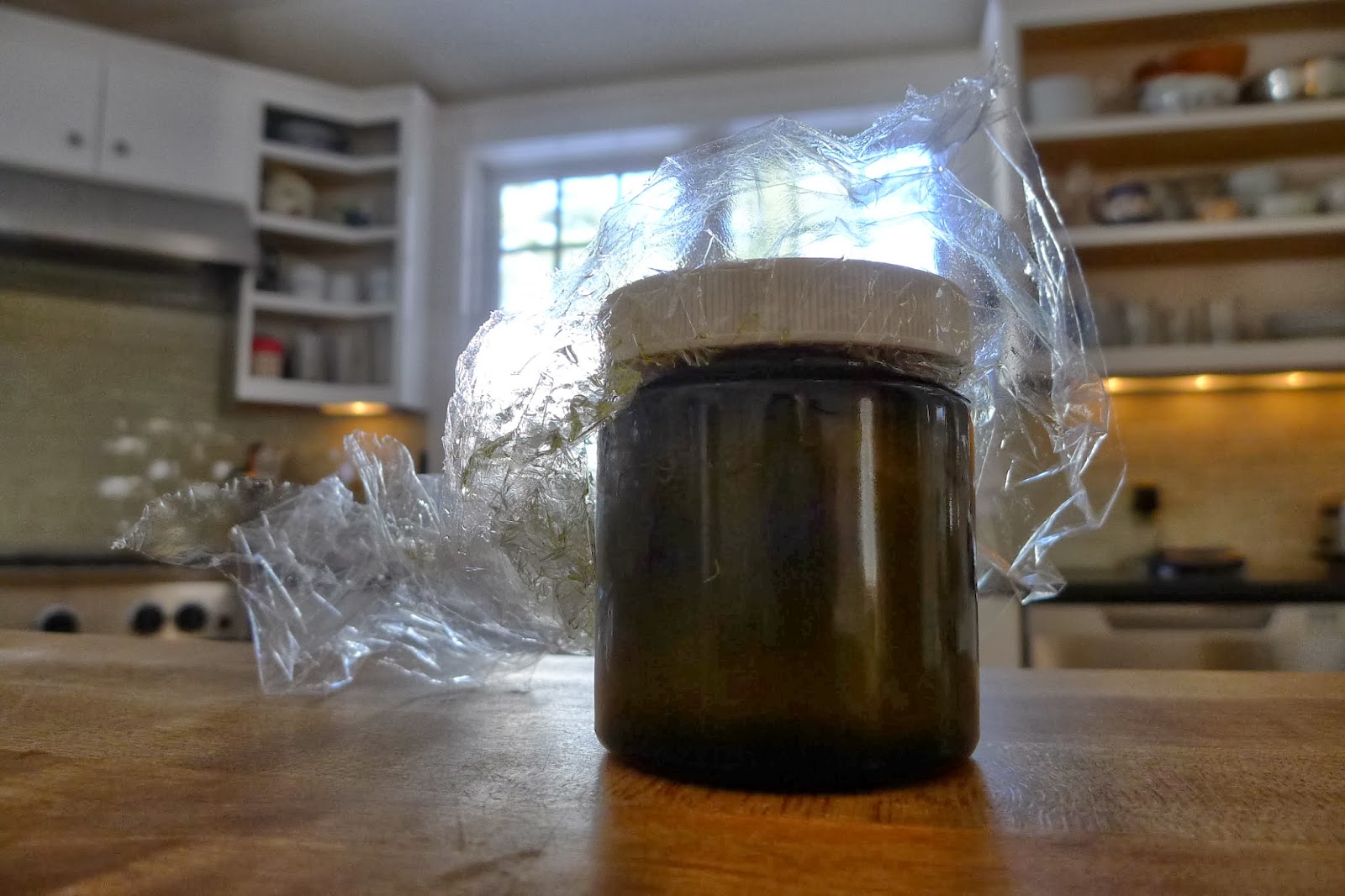