Perhaps it was the sound of the rain through an open window that put him to sleep so quickly. Perhaps it was the cannabis oil I dripped under his tongue, or maybe it was the seizure itself that caused his brain to crash into the blackness of sleep. With my arms around him, I watched Calvin, felt him drift off, the dim of the nightlight aiding my ability to see his eyes, fearful he’d awake to another of his stealthy seizures. Thankfully, he did not.

Later this morning Calvin seemed well enough to go to school, but at the top of the stairs, instead of heading into our room to play with his toys while I got dressed, he reached out and patted his bed, so I lifted him in and covered him up, then caught a few Zs myself. By the time he had awoken, the bus had already driven past. Michael had the car and so I called Lauren and she shuttled us to the school. Calvin sat beside me, eerily quiet and spacey while I studied him intently for any signs of more seizures. We’ve slowed the benzo wean to a crawl, but I still breath shallowly when the seizures come, afraid they will burn out of control.

“It’s not like these seizures are something Calvin will get used to,” Lauren said, as if asking.
“No, they’re not.” I replied flatly, sadly, wondering how they must make my boy feel.

We dropped Calvin at the school curb where Mary took over. Lauren drove me home taxi style and, after I pruned a few shrubs, as is my wont, I crawled back into bed for a rare late-morning nap. A couple of hours later I woke in a panic, thinking I’d forgotten Calvin somewhere, but soon my head cleared, the heart-pounding alarm being replaced with a familiar, gnawing worry.

By early afternoon, the skies had cleared to full sun and eighty degree temps. This year, the lilacs and rhododendrons appear to be on steroids and the forget-me-nots are blooming in clouds of blue, pink and white. Still, I feel a melancholia creeping over me, its shroud laced tightly around my neck. These are the days when the midday brightness is relentless, the harsh sun casting jagged shadows tugging my fingertips to my brow as if to dampen a migraine. It hurts to look at the vivid colors, their happy brilliance highlighting my despair. The barks of dogs and gongs of chapel bells and the rustling wind sound hollow and lonely, as if no one is around to hear them. The air is close. Behind me, an infinite stream of cars rolls past, and as I watch their reflection in my garden window I am reminded of the march of seizures themselves: endless, and budding with them, this melancholia. 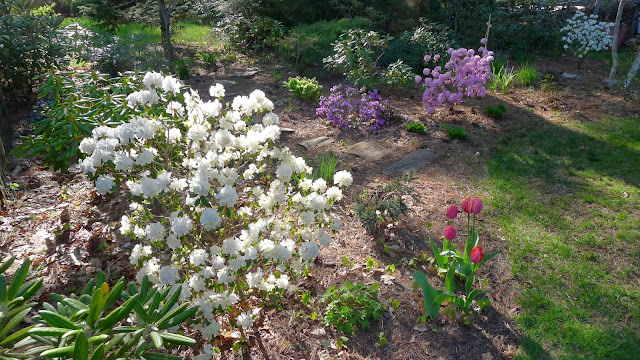