After spending the long weekend alone with a sick boy, and having dodged the Big One, yesterday a stream of smaller, partial complex seizures plagued my son. In an effort to stop the spate, I gave him extra THCA cannabis oil, extra clobazam and extra Keppra. He didn't have any more after his second extra dose of THCA, and he slept okay, but I'm still not convinced he's out of the woods.

As for me, the woods are what I want to get into. I feel like a caged animal, pacing back and forth between rooms, watching passersby with an eye on pouncing on the great outdoors. An inordinate amount of time is spent this way for the mothers of kids like Calvin, who are also their caregivers, nurses, doctors, friends. It's at once very tedious and frightening, really. I never know when the next seizure is going to strike, or when the Big One might come, or if one of the seizures might take Calvin's life.

This morning, I kept him home from school an hour or two just to keep an eye on him in case he had more partial seizures. Despite a runny nose he seemed okay, so I dropped him off at school and kissed him goodbye. In the event he stays there all day, I'll have a few hours to myself to play in the garden and romp with Nellie in the crimson, gold and pumpkin colored woods. 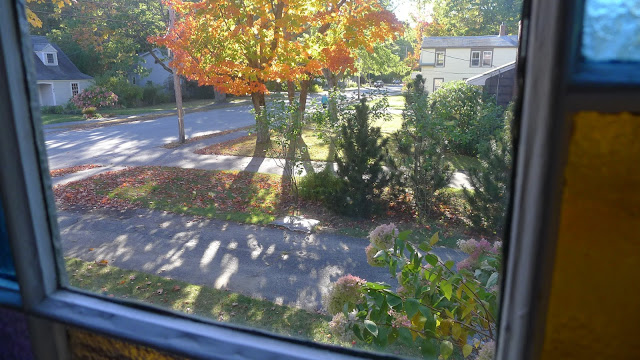