As we cruised down the highway at seventy-two—drivers beside us texting and eating and smoking cigarettes—a tinge of anxiety buzzed through my bones at the thought of getting into an accident. I wondered: what would happen to Calvin if Michael and I died in a crash? Unlike most other kids, his life might hang by the thinnest of strands in the fragile hours and days after our demise. Regrettably, I let my imagination get the best of me.

who would care for him? would he get his next dose of antiepileptic medication on time? what about the ones after that? what would happen if he didn’t get his cannabis oil? who would make the oil once he ran out? what tragedy would befall him if he didn’t get the right medications in the correct doses at the right times? and who would truly love our boy in our stead?

We were on our way to see Dweezil Zappa play his father’s music. The band members were happy and animated. The audience reacted generously with several standing ovations as early as the first few songs. Partway through, Dweezil explained that a couple of his siblings are suing him for the use of his own last name on tours. The crowd booed at the notion and one man to my right shouted, “Siblings are overrated!” During the last of his father’s songs, Watermelon in Easter Hay, Dweezil wept as he played one of my all-time favorite guitar solos. And though I don't know the meaning of the song, as Dweezil sniffed and dabbed his eyes, I imagined him remembering time as a child spent with his dad, perhaps lamenting his father's untimely death at barely fifty-three—the same age as Michael and I.

Two nights later I dreamt that Calvin died. In the dream I was alone in New York at some swank hotel. My street-level corner room was all windows, and I carefully closed each partial crimson drape to obscure onlookers' view and to hide my mourning. Friends and strangers flocked to my side to offer their condolences for this grieving mother. I was in a state of shock, wandering the streets and avenues like a zombie without my Calvin in tow.

“I feel relieved,” I told someone, blithely expressing my newfound freedom to move about without the burden of my severely disabled son. But then, having seen the flaw in the sentiment, I waned to bury myself in a hole.

A telegram arrived for me, and when I rummaged through my wallet looking for bills to tip the messenger, a couple of Calvin’s soiled bibs fell out and onto the floor. The realization hit me hard: I’ll never again see or touch my boy.

The thought yanked me out of my dream, or was it Calvin’s wakeful humming that did it? I stepped into his room, reached into his bed, rubbed his curved back, kissed his supple skin. With his legs tucked up underneath him nearly in fetal position, and with his head in his hands, he looked like a little watermelon there in his green tee, amid a fluffy comforter nest. And I thought of Zappa's song. And I wanted to cry. And I’m glad Calvin is alive. And I'm not ready to die. 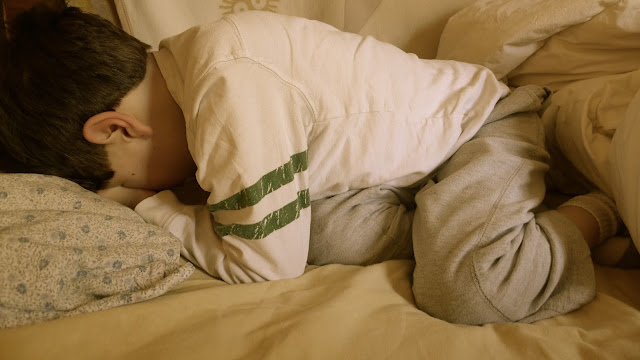