eight and a half weeks

In eight-and-a-half weeks, if all goes as planned, Calvin will take his last dose of the benzodiazepine, clobazam, aka Onfi, which we will have been weaning for almost four years. The other day I was telling a friend how much we have reduced it, explaining that four years ago Calvin was taking the pill equivalent of fifteen one-milliliter syringes of clobazam every day compared with just over one tenth of one of those syringes each day now. The visual comparison even shocked me.

Granted, in the year prior to beginning the wean, Calvin only had about thirty grand mal seizures and no partial complex seizures to speak of. The years that have followed the advent of the wean have been riddled with nearly double the number of grand mals and the appearance and major uptick of partial seizures. But the increase in seizures has not been as bad as I had expected in the face of withdrawal and the onset of puberty which can exacerbate epilepsy. More so, Calvin's behavior, sleep, mood, balance, understanding, expressive communication and overall health are legions better than when he was on high doses of the drug. I am also consoled in knowing that Calvin's grand mals have increased by less than ten percent since the first year of this three-plus-year wean, and his partial complex seizures have decreased in the past four months since having eliminated his vitamin B6 supplement and cut his CBD cannabis oil by two-thirds.

Even though Calvin is still having too many grand mals, the daytime ones have virtually disappeared since having reached his current dose of homemade THCA cannabis oil. My hope is that once he is free and clear of the benzodiazepine for a few months we will begin seeing a reduction in seizures. I also have another non-pharmaceutical trick in my back pocket if things go south: I'll find a way to try giving Calvin CBDA (I had an epiphany about CBDA a month or so ago and have since learned others are using it successfully).

So, my outlook for 2018 is pretty good concerning Calvin. I'm also hoping for a blue tsunami come November in the form of electing more Democrats—perhaps flipping control of the House and Senate—ushering in more sanity, compassion and a better representation of twenty-first century progressive America which includes more women and people of color.

But for now, I've got my eyes focused on that final dose of benzo, February 25th, which is in just eight-and-a-half weeks! 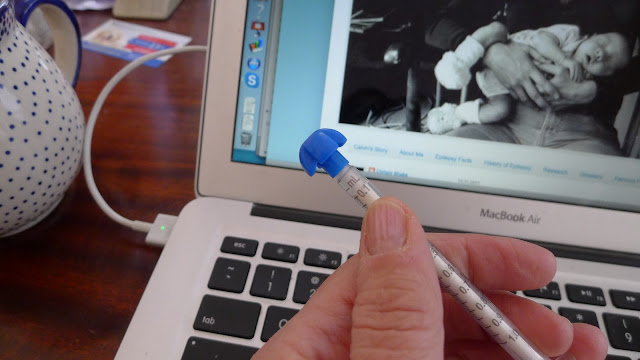