the breakthrough from gray skies to blue doesn't always bring me pleasure. sometimes the shadows cast by an unfettered sun are far too hard-edged for me. i must squint and scowl, avert my gaze. glowing colors which are saturated on dewy mornings appear washed-out and tired at midday, as if an antique snapshot made them that way.

on days like this the events of the world, the nation, feel crushing: weak and deceitful leaders, starving, neglected children, abused and oppressed women, desperate, fearful migrants, mass shootings, suicides, overdoses, executions. i overheard the grocer's cashier say, "she had on a dress she had no business wearing." her words stung as if they were meant for me. i wanted to say something like, people can wear whatever the fuck they want, or, as my dad used to say jokingly, what's it to ya, cabbagehead?

weariness and worry weave themselves into my body and brain. i know it's the consequence of stress and sleep deprivation. almost nightly, i catch myself clenching my jaw or grinding my teeth. perhaps it's loneliness i feel in my bones, strolling around in the garden somewhat aimlessly. what am i searching for? i bend, crouch and stretch, snapping errant twigs, clipping others, forcing growth into otherwise gangly, rambling, branches. i thirst for this control of nature; i have none when it comes to my boy and the seizures he suffers so endlessly. i wish so much for freedom from this malady.

recent talk of a merciful god bugs me. i recall a friend thanking god for protecting her non-verbal, disabled child from nearly choking on a chunk of celery that had been lodged in the back of her mouth for hours. why hadn't god simply protected the girl from gagging on the celery in the first place? why hadn't god saved the child from suffering scores of seizures that rack her brain? no doubt countless pleas have been made to god—concerning war, famine, disease, blight, disaster, injustice. they go unanswered regularly. though the existence of a certain kind of sovereign universal force (Nature?) seems reasonable, it's the belief in a merciful god—and one who condemns and punishes—in this messed-up world that is so astonishing to me.

in gazing through the shrubs and trees, I consider calvin, my little guinea pig, who is surviving on one pharmaceutical drug and two cannabis oils for his epilepsy. one oil i make, the other i send for in the mail. every good month is flanked by awful ones. his seizures are reliable and often come in clusters, of late, at the very least weekly. i hear of others afflicted with this disease, some too poor to afford their therapies.

folks go on about their freedoms while being hamstrung by healthcare premiums, copays, costs and deductibles so excessive they risk bankruptcy. some must choose between food and insulin. greedy corporate bastards and their political pawns feed on people's fear and ignorance, twisting the notion of what it means to be free, keeping people sick and shackled, widening the divide between those who have (money, power, control) and those who don't and never will. no one should profit off of ailing bodies. that's not freedom. that's tyranny.

near the end of my musings, i glance outside again and then at a spoon that hours before had peanut butter on it. it sits on a mysteriously-gotten susan sontag book, patiently awaiting to be picked up. it could sit there forever, until it becomes part of the room's wallpaper—an antique snapshot. i sit here wondering, though not concerned, what life is all about, my motions and emotions so crisscrossed in my body's sovereign continent. yes, sovereign.

a birdsong sailing through the screen door breaks my melancholy. i hear the bus pull up with calvin. bathed in late-afternoon dappled shadows, the garden has softened. the breeze is cool and exhilarating. the sun on my back feels good. 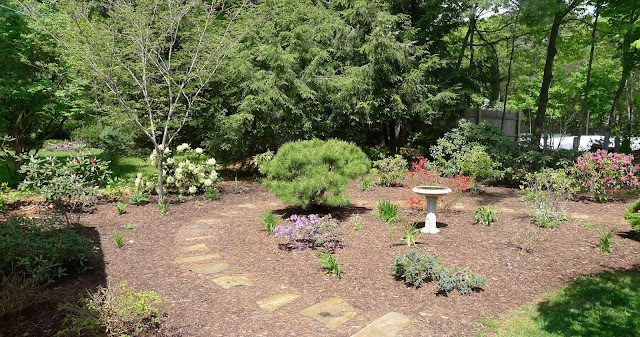 Posted by Christy Shake at 5:38 PM