Foul is the smell coming from my son's mouth, as if there's something rotting inside him. It stinks like a festering wound. I think some of it might be blood from having bitten his tongue during the seizures he suffered the other night and this morning. Of late, the grand mals are coming in clusters—nine in the past month.

These seizures, drugs and side effects have been ruinous for all of us in some form or another, and there's really no end in sight. Calvin can't stay still for even a few minutes. It's called akathisia, the movement disorder characterized by an inner feeling of restlessness due to the use of antipsychotic drugs. I know for certain it's a side effect of the benzodiazepines Calvin was on from the age of three until fourteen. Keppra is also a culprit. I fear they've changed my boy's brain forever. Ruined. Devastated. Wrecked. I despair thinking of all of the if-onlies and might-have-beens.

Forlorn, my antsy boy held briefly in my lap, I remember Michael's notion that music will save the world, so I get up and turn on FIP (France Inter Paris) radio network. I've been tuning in a lot lately, and it's eclectic music and ticklish French accents have been a saving grace. The second song, River Man by Nick Drake, is gorgeously sorrowful and familiar. A few of its lyrics always bring me to tears.

Betty said she prayed today
For the sky to blow away
Or maybe stay
She wasn't sure.

I'm not a praying gal, but sometimes, like when Calvin can't settle, is manic or is in the thralls of epilepsy's fits and I feel myself sinking, like Betty, I find myself wishing for the sky to blow away. Other times, like when Calvin can remain in my arms for extended periods, looks straight into my eyes, or when I see him smile and give Michael hugs and kisses, I'd grip fists of that sky forever. 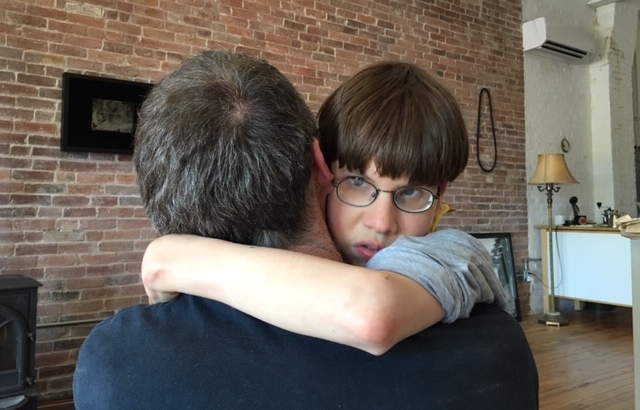 Posted by Christy Shake at 3:13 PM