Calvin is, most endearingly, my little monkey. He’s an imp who loves to cling around my neck and, when he’s not howling just like Howard Dean, he’s screeching like a chimpanzee. After a very short while it gets pretty obnoxious but sometimes it’s damn cute, even funny, and once in a while gets a chuckle out of Michael and me.

A favorite film of mine reminds me of my little monkey—the black and white classic Miracle on 34th Street with Natalie Wood. It was one of her first film roles as a child actor. She plays Susan, the six-year-old daughter of a pragmatic single mother, a Macy’s executive, who doesn’t believe in pretense or promoting fantasies such as Santa Claus.

At one point, Chris Kringle, who is employed by Macy’s as their seasonal Santa, is teaching the serious little Susan to imagine and pretend—to act like a monkey. Chris shows her what a chimp might sound like, pressing his rounded tongue slightly out of his mouth, the tip of it tucked inside his lower lip, then humming. It's kind of a cross between an “m” and an “n”—“mnnnnh, mnnnnh, mnnnnh.“ Calvin looks and sounds just like this when he is vocalizing, humming in his crib or while happily padding around the house.

Sad thing is, the humming is the extent of Calvin’s “speech.” He’s older than the girl in the movie who not only talks, but philosophizes. It’s a hard thing to get over knowing Calvin can’t share his dreams and desires, can’t pretend or tell us when something bothers him or hurts. He can only cry, hum, coo and scream. But if I have any morsel of power over that outcome, Calvin will be talking one day, if only to say a few simple words. 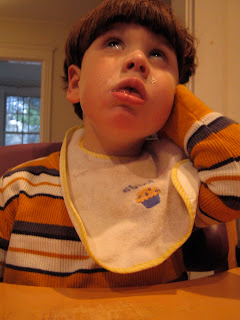