Not too long ago a former teacher of mine wrote to me. He keeps up with the blog and occasionally comments, particularly when I write about my childhood and my family, who he was close to when I was growing up.

Hoping to learn more about Calvin’s story, rather than exclusively my own story as it relates to Calvin, he suggested I write about what a day, a walk in the park, or a trip to something like the circus might be like for Calvin. I thought it sounded like a good idea, to somehow show Calvin’s view, but frankly, and perhaps I am simply not imaginative enough, I cannot get my head around the task.

I had written to him:

“it is difficult to imagine what Calvin is or is not aware of. He is clearly oblivious to things like birthdays and other abstractions. He even ignores our dog. His expressive communication is practically nil. It isn't completely clear if he knows the difference between us and other people. I'd like to think he does, and perhaps he is aware of a whole lot more than he appears to be, but that may not be saying much.”

I’ve started posts, written from Calvin’s perspective, several times. Somehow it just doesn’t gel. I’ll have to spend more time thinking about how life must be from my son’s perspective. I can start with the basics. He feels pain and discomfort. He knows no fear. He is visceral, tactile, reflexive, reactive. He loves attention and physical affection, tickles, hugs, kisses. He enjoys music and funny sounds. He relishes motoring around the house, up down and around and has to be moving one hundred percent of the time unless he is asleep. Any and all objects go into his mouth. If he could, he’d bang the hell out of everything, and he just can't stop staring at the sun. It's his bling-bling, I guess. Not much to go on but it's a start.

But to know how he deeply feels about complex things—his emotional connection to the world and how he cognitively interprets what his mind and body takes in—I am at a complete loss. I recall a photo of Calvin at an agricultural fair, holding on to a cyclone fence surrounding pigs and goats in piles of sawdust. He is smiling but I'm pretty sure it's the diamond pattern of the wire and the feel of its metal that engages him. He doesn't appear to see the animals, though perhaps he hears them.

I’ll keep grappling with the idea of Calvin's view. After all, it is Calvin’s story. I wouldn’t be writing it if it weren’t for him. 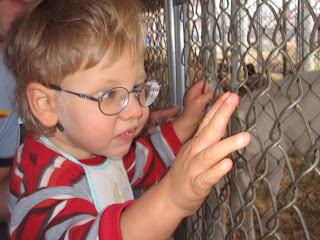