One of the last family trips we’ve taken was nearly five years ago. We loaded up the car with camping supplies, firewood, Calvin, and a bunch of other paraphernalia, filling the car to the brim, then headed north along Maine’s serpentine coast to one of our favorite places in the world, The Lookout.

Perched in the center of a grassy hillside is the historic white hotel. It shares a thin peninsula with several modest cabins buttressed by chunky stone fireplaces and weathered wooden decks smelling of pine and seawater. Inside the cabins, oversized couches with thin upholstery elbow shelves stacked with dog-eared books, faded magazines and board games missing pieces.

Once inside, we dumped our stuff on a soft bed wrapped in a tufted cotton spread and carried Calvin to the bluff at the land’s edge. Michael attempted the steep eroding ledge first, I handed Calvin to him then skidded down in my sneakers. The tide was way out revealing a curved sandbar of pebbles and crushed shells, tiny chips of indigo and knobby barnacled oysters with opalescent cores. We spent a few hours exploring clear pools, warming ourselves on flat rocks and resting in the shade of twin cypress trees clinging to chunks of soil atop a rocky outcropping.

After a lazy day we put Calvin to bed then cooked and ate dinner in the adjoining kitchen. Amidst the dull clang washing wooden spoons and metal pots we heard Calvin make a strange sound. Quickly, we peeled back his blankets to see him blue and gulping. It appeared he was having—or had—a seizure. This was the first one since his epilepsy diagnosis the previous month and after having started an anticonvulsant drug. Calvin was only two.

I ran up the hill a hundred yards to the caretaker’s house. It was after ten and dark outside but I could see the glow of a kitchen light through a small window. Hearing my urgent knocks he swiftly answered the door and, out of breath, I asked to borrow his phone to call 9-1-1. Then I ran back to our cabin where Michael held Calvin on the bed. He was feverish, clammy and listless.

Within minutes some First Responders appeared, the ambulance not far behind. They asked us if Calvin was responding normally and I told them “it’s hard for me to tell,” the permanent jerky roving of his eyes making it difficult to know. “Calvin never looks us in the face or answers to his name,” I said. The EMT checked his pupils and heart rate and told us that she believed he was post-ictal. “What does that mean?” I worriedly asked her. She described it as the disorienting state after a seizure occurs.

In the boxy ambulance I laid on the gurney hugging Calvin in my lap. Michael hurriedly packed up our things and followed us in the car. The Blue Hill Hospital, twenty minutes away, was very small, but the staff was kind and understanding, though there was really nothing they could do.

In the wee hours of the morning after Calvin had stabilized we embarked on our three hour ride home. Later that day, a doctor’s visit and some x-rays revealed that Calvin had pneumonia. We learned that any illness, no matter how benign it might seem, often triggers seizures in people with epilepsy. After that harrowing weekend we didn’t take any family vacations for over four years, and since then, only one. The seizures continue to surprise us around every corner, and the drugs climb and multiply. So mostly we stay put, and dream often of visiting magical places again, like The Lookout in Blue Hill. 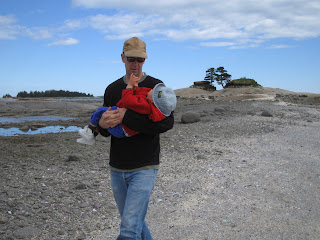