Yesterday we drove to Boston to see Calvin's neurology team. Up at five, out the door by seven-thirty, in Boston gridlock by nine forty-five and at the hospital by ten to draw blood.

After the long drive, Calvin having screamed the entire first hour, we were already exhausted, as if we had driven seventy-five the whole way with all four windows down, cars and trucks roaring by. But shortly after checking in and seeing Francoise's smiling face, her dark skin gleaming against her bleached white lab coat, we breathed a sigh of relief.

Francoise is what we call our "one stick wonder". To say she is a pro at drawing blood from kids like Calvin who are a "hard stick" because of their low muscle tone is a gross understatement. She is practically a miracle, the only phlebotomist who gets it first try every time, and then it gushes like Old Faithful, which is a very good thing. Yesterday was no exception. I offered to move her up to Maine where our experience with blood draws is often painful for all of us, but mostly for Calvin who must endure restraint, tight tourniquets and steely needles poking, prodding and fishing around in his arms, hands and ankles, sometimes to no avail, leaving bruises all over his body and to our psyches.

Next, Calvin's neurologist and dietitian greeted us with hugs and spent a relaxing hour discussing Calvin's seizure activity, behavior and various plans of action. Like always, they mostly listen, answer our questions, validate our suspicions and offer options for moving forward. They let us steer the boat, the ultimate decision being ours. We are the best team in the world. We troubleshoot, weigh risks versus benefits and utmost in our minds is quality of life, for Calvin and for us.

For now we will hold steady on Calvin's two antiepilpetic medications, knowing there is room to move up on both, though hoping it's not necessary. We will enjoy transitioning fully off of the Ketogenic diet which we have been weaning Calvin from over the course of eighteen months. We will continue to be tireless advocates looking for ways to stomp out Calvin's seizures.

The drive home was relaxing. Calvin was calm and collected, playing with his bare feet and putting his toes in his mouth much of the way. When he's cute, he's damn cute. When he's not, he's so not. These days, mostly, and with the help of his neurology team's tenacity and our thoughtful analysis, he's mostly damn cute. For now, anyway. 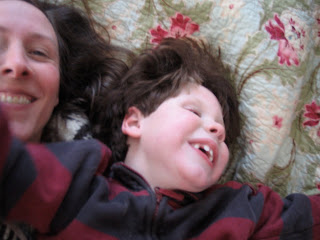