Calvin attended preschool at a place called Morrison Developmental Center. It used to be called the Cerebral Palsy Center, though it caters to disabled kids and typical kids alike, sharing one big classroom. That’s what made it great.

There was a cute little boy in his class who had what seemed like a pretty severe case of Down Syndrome. He also had epilepsy, like Calvin. His nurse pushed him into class reclined in his wheelchair, his head in a supportive rest. I think he may have been tube fed, too. I recall him crying at times, his face all hot and pink, making my throat tighten and my heart sink. Poor little guy, I thought. I wished I could take his misery away. Mostly, though, he slept during the few hours I was there watching Calvin, the heavy sedating epilepsy drugs working their black magic on his brain, and Calvin's.

Last year we ran into the boy with his mother at a Boston hospital. Our sons share the same wonderful neurologist. In a short exchange we introduced ourselves, she a kind, attractive curly-haired blond who I guessed was several years younger than I. She asked if we had other children. I said, no, thankfully we did not, thinking Calvin such a handful, medically, physically and emotionally, and being too old to risk another pregnancy. By sheer reflex I asked her the same. Her eyes brightened and she replied, "thankfully, yes," that her second child was some sort of godsend that helped her get through the difficult days, the grief, pain and worry over her disabled child, and who somehow made it all worthwhile, all okay. At that, a hot poker jabbed into my ribs and worked around fiercely in my viscera. My heart cringed and I felt a little ill. Cat got my tongue, too, though I tried my best to conceal the blow. I wanted what she had, what she so effortlessly seemed to have that filled her heart and soul with joyous riches beyond any I could possibly imagine. 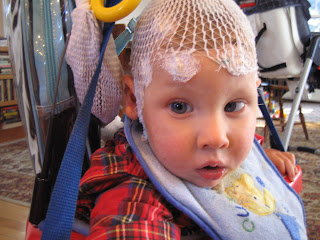