Years ago I met a woman whose son had grave neurological complications and intractable epilepsy. She told me that he had been born missing half of his brain and she didn’t know why ... no one knew why. As mothers of severely disabled kids, we had that in common—the not knowing.

We used to sit together on the couch drinking coffee and eating pastries while looking hard into each others eyes. I listened to her story and she listened to mine. We cried and hugged. I was in the depths of my grief over Calvin while she seemed resolved after years of misery perhaps having dulled, diminished or hardened off some.

When her son was a baby he’d cry all the time, day into night. She wasn’t sure if it was due to gastrointestinal stress from his inconceivably low muscle tone or if it was purely neurological in nature. She described how the only way to stop her son’s shrieks was to rock him. Her nights were sleepless so she developed a plan. Inside the boy’s crib she placed a bouncy chair, the vibrating cloth-covered kind with the lazy v-shaped frame. She tied a string to the top edge long enough to dangle outside of the crib. At the base of her son’s crib she camped on a mattress with blankets and a pillow. When he cried she’d yank on the string to bounce him while at the same time, somehow, she tried to rest. He stopped crying but only until she drifted off, the string slipping from her grasp. No doubt the solution was abandoned.

My friend had a second child when her son was two. I’ve heard people say that having two children is exponentially harder. Her experience must have been impossible—impossible enough to make the grim decision to put her beloved but unhealthy, seizure-ridden child into a nursing home when he was only three. Around that time her marriage broke up.

Her crybaby, like mine, eventually grew out of his distress. He became accustomed to the nursing home where his needs were tended to around the clock by caring people rested enough to do so. Speechless, the boy lit up any room with his bright-as-a-star smile and he touched many lives from the confines of a bed and wheelchair. When he was just fourteen years old he contracted the last of countless cases of pneumonia and died, his entire loving family at his side. The boy had never enjoyed seizure freedom.

Please share Calvin's story with others. Help bring us one step closer to a cure by promoting epilepsy awareness, one story at a time. 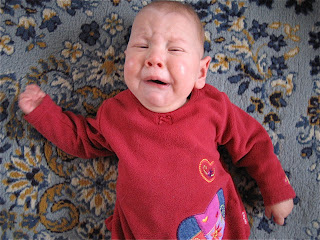