Michael picked me up from the airport yesterday morning after a red-eye home from San Diego. I had spent six days visiting my eighty-one year old mom who has Alzheimer’s. I arrived weary with a stiff neck and aching muscles from sleeping half sideways in the plane and then in an airport seat, my boots propped up awkwardly on my luggage.

As a welcome home he cooked a wonderful spaghetti dinner and we had just sat down to eat it in front of a rolling fire. Michael had the baby monitor slung around his head when we heard Calvin move. It was just after eight, his new time for seizures, so instinctively I ran upstairs and found Calvin, red in the face, listless and semi-responsive, suspicious he had had a silent seizure.

By the time I got downstairs my meal was cold but I had lost my appetite anyway. Michael had already resigned to washing the dishes and putting things away. So much for my warm welcome home. It was spoiled.

It's a crappy existence to be imprisoned by a sick kid who never seems to get any better no matter what we do. The seizures remain elusive even in the face of—or perhaps due to—mounting drugs, and his autistic behavior gets worse and worse but that could be the drug side effects, who knows?  What we do know is that we are trapped.

Friends innocently ask us, “so what did you do this weekend?” I think to myself, what else but what we always do? A whole lot of nothing. Thankfully Michael rescues us from the grind, if only a bit, by his ever-expanding repertoire of delicious home cooked meals or a Sunday drive (as we cross our fingers hoping Calvin will stay calm.) Sometimes we spice things up on the weekend with an exciting trip to the cafe or an action packed visit to the hardware store. Yup, it’s pretty sorry when you get right down to it, an entire family tethered to a life of seizures, drugs, side-effects, doctors, diets, rigid schedules and a seven year old kid who is still in diapers, can’t walk by himself, can’t talk, doesn’t sleep well, screams much of the time, seems oblivious to the world and yet exercises a stubborn refusal to walk, with any semblance of skill, when we need him to.

I don’t believe in hell, but every once in a while I’d swear I was in it. Heaven is waking up, after a solid night's sleep, in a cozy seaside cottage hearing wind chimes, foghorns and songbirds—all by myself. 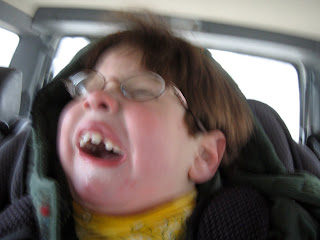