Early this morning, rain pouring in sheets from the sky, I found myself in bed gazing outside in despair ... again. This time the tall graceful pines shown nearly black against a cloudy opaque sky, their crisscrossing limbs knitting a familiar lattice in the frame of my window.

At five o’clock, as the deluge began to pummel the rooftop, my boy cried out. I had seen it coming yesterday, with his manic behavior, incessant screaming accompanying a low-grade fever. This one lasted longer, his convulsions more pronounced than usual, and after nearly two minutes of spasms—still no signs of stopping—I began fearing this might be the one that lands us in the emergency room again. But thankfully the rhythmic jerks became erratic then subdued, his breathing resumed and his slender fingers went from the purplish look of frostbite back to healthy pink.

The three of us fell asleep to the peaceful drum of beads pattering on shingles. An hour later Calvin awoke to a partial seizure, his eyes zigzagging in their sockets, teeth slightly gnashing, the color draining from his lips as a queer lopsided grimace crept across them. His eyes stilled. It lasted almost two minutes—twice as long as usual—then knocked him out for another hour.

I wish this rain could wash away the miserable reality of reliable seizures Calvin must endure so that he could begin to rest, to develop, to live—and fully. For now I will simply imagine that the universe is showering us with its gorgeous tears of a trillion sparkling droplets. Drenching us. Cleansing us. Drowning our sorrows. 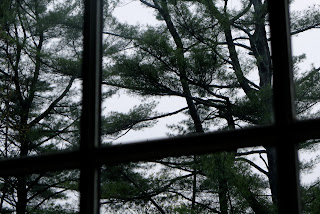