I once had a friend who married a woman with one leg, the other having been amputated when she was a girl. When we first met I didn’t know this about his wife, having never met her, only seeing her from afar driving off in her station wagon, her bobbed white coif peeking out from behind the steering wheel. “My wife is an amputee,” he said one day. I was taken aback, not by the fact that his wife had a prosthetic leg but by what he called her, how he defined her. He didn't go on to describe her otherwise. I told him that she wasn’t her cut off leg, her artificial leg, she was a whole, complex person and by calling her an amputee it reduced her, at least in my mind. In any case it bugged me, like when folks call homeless people “bums.” I find it offensive.

I have a similar reaction when someone innocently asks, “is your son an epileptic?” I quietly bristle and reply, “yes, my son has epilepsy,” hoping they’ll note the difference. Not long ago I was having this conversation with a friend I hadn’t seen in several years, explaining my thorn about how certain individuals are defined with one broad term. He had the same reaction and added, thoughtfully, that society doesn’t call someone with cancer “cancerous.”

Perhaps I am overreacting—which I sometimes do—after all, people with diabetes are often called diabetic and somehow I don’t find that offensive. But to distinguish, epilepsy has an age-old stigma attached to it of being associated with demonic possession, lunacy, and contagion. At one time it was believed to be the product of malign forces and sinful behavior and, in more recent history, something to be ashamed of. People with epilepsy were often fettered away and shunned by society. Parents of children with the disorder secreted them behind doors. Even today, children with epilepsy are singled out and contemptuously mocked in films.

So yes, my son Calvin has epilepsy, but that is not who he is or what he is—it does not define him. It simply afflicts him and, most regrettably, there’s not a whole lot he can do about it until we find a cure. Until then, he’s a sweet little boy full of smiles and giggles who has to deal, senselessly, with relentless seizures and mountains of mind altering, debilitating drugs. My son Calvin simply embodies—defines—everything one could say about love.

Please be a hero and share this story on your Facebook page or forward the link. Don't be afraid. Give it a try. It doesn't hurt a bit and it could do a whole lot of helping. 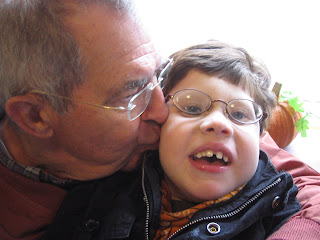