Yesterday was Calvin’s first day of school. This time, after repeating kindergarten last year, he enters first grade at the public school down the street a spell. A full-sized yellow bus pulls right up to our driveway and Cindie, his beautiful blond bombshell of a bus driver, jumps out, a mane of golden hair bouncing behind her, I give her a hug and she lowers the lift to accommodate his pushchair. Usually, Calvin walks on and off the bus with help, but for the first day, aware that the new staff wouldn’t know how to handle him safely, and so as to avoid some hard knocks, I buckled him into the chair, then donned my helmet and leather jacket and sped off behind them on my motorcycle.

I spent the morning training his new one-on-one, Mary, to help him walk safely using the harness, how to hold it with a bit of slack so he doesn’t lean into it as if fighting against a stiff wind, and how to lead him by holding his hand. I briefed her on his myriad of habits—biting everything, fingering, putting his hands over his ears, yanking off his glasses, staring at the sun. I explained his orthotics, his diaper changes, what his seizures look like, his poor balance and the fact that he doesn’t have depth perception, never having developed 3D vision, so is apt to run into things. And last but not least, while showing her how to feed him and to facilitate his participation in the activity, I educated her, along with the other attentive ed-techs, about the monster that pummels him, which is epilepsy.

As the three of us traipsed around the hallways, Calvin in the lead wearing his blue harness, I was mindful of the fact that he was being gawked at by the other children, like an animal behind a cage or on a leash. I’ve kind of gotten used to it—kind of—having been through the school of hard knocks myself since Calvin was born, but every once in a while I must resist the urge to tell some kid or adult “take a picture, it lasts longer.” I remember last year when another student, probably a third-grader, asked, “why does he wear that leash, is he a dog?” I replied, “no he’s not, are you a pig?” She pleased me with a sour scowl then sulked away.

All in all it was a pretty good first day. Calvin’s one-on-one managed to avoid a few close calls between the windows, cinder block and brick walls and Calvin’s head. I’m nervous, though, because eventually, if this year is anything like the last two years, he’s going to get bumped and bruised and he’s going to go down. I just hope when it happens it’s not too terribly hard. No one needs a lesson like that, especially Calvin, who gets more than his fair share of hard knocks from seizures, drugs and falls. 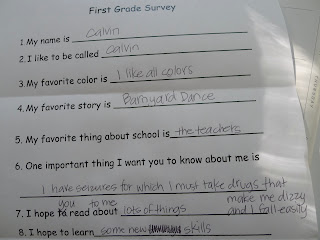