I think my new friends’ son has stolen my heart. His name is Jacob and he’s five-and-a-half years old. He’s a little smaller than Calvin and has a tussley head of wavy chestnut hair. Beautiful light greenish-blue eyes silently stare up from a heart-shaped face as he lies on the couch rubbing his belly. We are just getting to know each other.

I ask him, “Jacob, do you like school?” He pauses a minute, his face shyly turned toward his dad. I ask again and he claps his flat palms together, little fingers spread like flower petals. “Yes, you do! That’s nice. Have you made lots of friends?” His dad tells me about a couple of kids that have been in his class. “Remember Margot?” his father asks him. “I remember Margot,” I add, “She was in Calvin’s class, too. Do you know Margot?” An impish smile appears on Jacob’s face sweet as a sugarplum. He remembers Margot, the little girl with super curly dark hair, long lashes and fair skin. She has seizures too, I think to myself. Thankfully, Jacob doesn't have the seizures yet. I hope he never does.

Jacob’s mother lifts him off of the couch and buries her head into his neck smothering him with kisses. She plops him down by the open window and he stands, legs slightly bent and apart for balance, waving his hands and cooing. He’s uber-cute, reminds me a bit of Calvin.

We finish our glasses of wine and my friend and I start heading out to grab dinner. Jacob’s dad gathers him up in his arms. More smooches from mama. Jacob kisses and offers his palm to say goodbye to me. At that moment I wonder if our boys could become pals, like me and his mom. Calvin has never played with other kids, only been in their midst, never really interacted in any meaningful way save the occasional touch or pat. Perhaps these two boys share something more in common, could enjoy each other's company over time. I'd like that, I thought.

After a nice visit over burgers and fries, on my drizzly drive home it was hard to make out the road everything was so black and shiny. I was eager to get back to see Calvin nestled into his new bed that's big enough for me to crawl into with him, though I haven't ... yet. I bet Jacob's parents sleep with him too, at least sometimes, I thought. There's something about sleeping with your child whose words are absent—whose future is so uncertain and seems to balance on a wire—something so primal, simple, essential.

At home I reach through the safety net on Calvin's bed to cover him. I stroke his head and think I love you. In my own bed I curl up next to my warm, slumbering husband. I imagine, for a few seconds, Calvin and Jacob playing on the carpet together, toys spread out between them. Then, with the familiar white noise of the baby monitor hissing like moist steam from a radiator I slip off into my silent darkness and dream of friends past, present and non-existent. 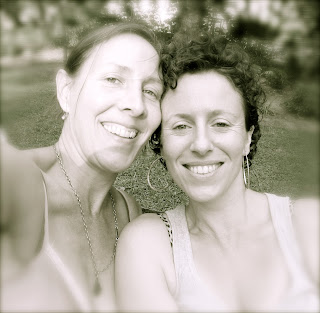