Sitting on a miniature blue plastic chair in front of twenty first-graders was a first for me, but I survived. The kids were curious about their classmate, my son Calvin, so I offered to visit and tell them a little bit about him since he can’t do it for himself.

The children sat attentively on a speckled grayish carpet while Calvin perched in his one-on-one’s lap on the floor just to my left. Having increased his morning dose of seizure medicine he appeared a bit of a zombie—lids drooping over vacant eyes, slack lips with some excess drool soaking into the rolled pink kerchief tied around his neck. I hate to see him this way, so glazed and expressionless, but often that’s what the seizure drugs do—transform him into a rag doll boy I hardly recognize.

I told the kids that Calvin was born too early, that he wasn’t quite ready to come into the world, and that his brain was a little different than theirs. I asked them to imagine going to the grocery store with their mom or dad and what they thought might happen if the road were blocked. One bright boy with a lazy eye and thick glasses raised his hand and said, “we’d have to go a different way and it would take longer.” Just the answer I was hoping for, I thought. “That’s how it is for Calvin to learn things,” I said, “his brain has trouble telling his body what to do—runs into roadblocks—and so it takes a very long time for him to learn things.”

Next, I opened up the floor to questions and several skinny arms eagerly sprang from their laps. ”What’s your name?” I asked, “and what’s your question?” One by one the little tykes rattled off their queries, some stumbling a bit as they went:

“Um, Why does Calvin drool so much?”

“How come he bites his shoe?”

“Why can’t Calvin talk and why does he wear that bandanna around his neck?”

“What’s that blue thingy he wears that you hold on to?”

“Um, how come Calvin flaps his hands and puts them over his ears and makes those funny sounds?”

I tried to answer each question thoughtfully, equating many of Calvin’s tactile and self-stimulating behaviors to thumb sucking, and blaming the drugs for his drooling and poor balance. To the best of my ability I explained what side effects were and described Calvin’s seizures as a lightening storm in his brain that he can’t stop and that makes his body shake and shiver. And finally, another boy asked:

“How come he still wears diapers?”

I reminded him that it takes Calvin a long time to learn everything, including being potty trained. I mentioned how some adults like Calvin have to wear diapers. The flock began to giggle, little hands with little fingers shamefully covering their mouths. I gently told them, without scolding, that it wasn’t funny, but rather, it was sad. Sweet smiles dissolved into solemnity and a little blond fairy sitting next to me, named Summer, raised her hand for the second time. “I’m so sorry for you and your boy,” she quietly peeped in a clear voice. My throat tightened and I got that familiar sting in my nose. I swallowed the lump, held back my tears and, without trembling, was able to get out, “did the rest of you hear what Summer had to say?” I repeated her words and added, “isn’t that so kind and caring?” In a blink of an eye several more hands thrust upward. “I’m very sorry for Calvin, too,” one child added ... and then another ... and another.

By that time the kids had started becoming restless, so I ended by saying how much Calvin would like to have friends and that he’d be their friend, too. Mary, Calvin’s one-on-one, and I took Calvin by the hand and lead him out of the room saying goodbye to his classmates as we went. Just outside the door Summer stopped us. I turned to her as she reached out her dainty arms and gave me a big hug. I knelt down to receive it with a warm embrace for her. Then she put her arms around Calvin from behind, and as she did he fell back into her. Little Summer held him up until he steadied. “I think you are already Calvin’s best friend,” I told her. A big smile crept across her face that I wished Calvin could see and understand.

This morning I felt a chill in the air telling me that autumn is already on its way. A long, frigid winter isn't far behind and after that we'll have a rainy, muddy spring. But it warms my soul to know, now, that my precious little Calvin will get to enjoy the warmth of Summer every weekday all year long. 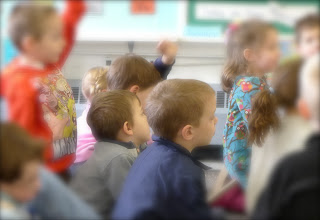