Sometimes I can’t believe I have a retarded kid. He hasn’t yet been officially diagnosed as such, but it is a fact that his development, both mental and physical, is retarded—delayed. And that developmental gap continues to widen as his vicious seizures persist and as long as he is sentenced to a life of taking potent, mind-altering, developmentally disabling drugs.

At times, when Calvin becomes hysterical, regarding him nearly makes me ill, especially when he screams with that vicious, crazy look in his eyes. Furrowed brow, snapping his fingers incessantly, I hardly recognize him. At these times he won’t shut up. When he is like this he does not appear human, but more like a rabid beast howling—a pint-sized toothy monster—and it is difficult to bear. Lately he is like this a lot.

I find myself either staring in disbelief at my little aberration or averting my eyes and trying somehow to drown out the irritating and endless stream of piercing screeches that emerge from between his clenched and grinding teeth. I can’t tell if it’s excitement, over-stimulation, discomfort or simply wanting out of his high chair, car seat, crib or jumper. I do, however, know the antidote—though at times I lack the energy—which is to pick him up or walk him around, his harness secured and tightly in our grasp to prevent a bad fall. He instantly morphs into the kid we know and love, happy and smiling as he explores the house, plays with his rattles and toys and tries to chew on everything he can get in his mouth.

I believe the origin of Calvin’s mania is drug-induced. I can only hope it is a reversible condition if he can ever come off of the medications and be free of seizures. Until then, and at moments, we have a three-foot tall affectionate little elfin monster on our hands who is growing by the day. 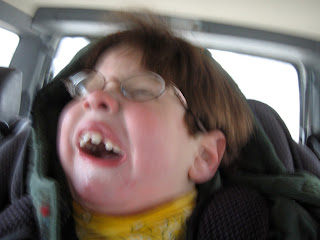 Posted by Christy Shake at 1:58 PM