Yesterday I was the urine delivery girl, shuttling Calvin’s pee to the lab for testing. Lately, we’ve had to do this bi-weekly since he’s got what they’re calling sludge in his kidneys resulting from his diet, his calcium supplementation—or lack thereof—his anticonvulsant drugs or some combination of the above.

While I was standing at the lab window holding Calvin’s specimen I heard a distressing sound coming from the room next door where they draw people’s blood. I took a step or two backwards and through the skinny oblong window in the door I saw a chubby baby about a year or so old. He was red in the face and crying as the technicians tried to draw his blood, though they were obviously having trouble.

Tears welled up in my eyes and a sorry grimace twisted my face in that familiar way sobbing does to a person. The woman behind the window looked worriedly at me as I handed her the BIOHAZARD bag containing the cup of Calvin’s urine. I explained, while pointing to the room next door, that the child’s misery pained me, reminded me of the years of suffering Calvin has endured—and continues to endure—whenever he has to have blood drawn because of his epilepsy, which is often.

I left the lab with wet eyes, found a bench outside, buried my head in my hands and wept, and as I did I remembered one of the countless times a phlebotomist couldn’t find Calvin’s vein after several painful tries. She sent us away to a different lab hoping we'd meet with success. As we were leaving a woman touched me on the arm and said something like, “I’m so sorry, I know how hard it is, I’ve been through the same with my daughter.” Somehow hearing her say that lifted a weight off of my shoulders. She had taken some of my grief as her own.

Then I remembered when I was eleven or twelve and had plantar warts on the bottom of my heel from going barefoot in swimming pool locker rooms. The doctor would freeze the growth, which was embedded deep in my flesh, wait a few days then cut out the dead cells and re-freeze the raw wound. This went on for weeks. The procedure was extremely painful, like putting salt or gasoline in an open wound then stabbing it. My mother held my hand as I lay on my stomach on the blue vinyl examination table. I’d squeeze her hand when it hurt and she’d squeeze back as hard as she could. I couldn’t see her face but I believe she was crying for me. I could hear it in her trembling voice, in her faint sniffling.

And then, while still slumped on that lab bench, I thought of all the little suffering kids in the world: my friend Kyle’s sixteen-year-old sister and my friend Katie’s seven-year-old niece who both battled leukemia and lost. And Katie’s nephew who continues to struggle with the aftermath of the toxic treatment to fight brain tumors he had when he was five. I think of the little children who have diabetes and suffer needles and other trauma that I’m probably totally ignorant about. I think of my friend Monica whose boys have both had heart surgery, one when he was just five days old, the other barely a teenager. I think of the kids who have brain surgery or bone surgery or any kind of surgery or chronic condition. And I think of these innocents and shudder when I hear strangers say that there is a reason for everything, and I wonder if parents of these children really believe that.

After I gathered myself together I took a deep breath, straddled my motorcycle, fired her up and took off down the street, the only thing between my tears and sad thoughts being the fresh air, and I was keenly aware that my feet were gliding just inches above the unforgiving earth. 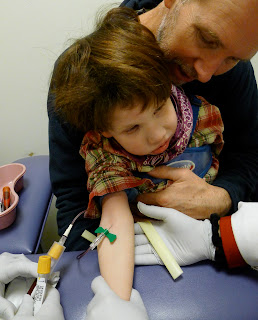