My husband Michael and I watch a lot of movies, mostly at home. Not too long ago we saw one about a couple whose four-year-old son had died in an accident. The plot caught us off guard.

Throughout the film I found myself identifying with the grieving mother. I stepped into her shoes click-clacking down the grocery store aisle as she watched another mother argue with her child. I sat behind the wheel of her parked car as she mournfully watched young dapper couples headed to the prom, all neat and shiny and pressed. I saw through her eyes the boys behind the glare of school bus windows sitting straight and confident in their seats. I felt her tears run down my face as she watched happy moments of other parents and their children, her own having been buried with her child.

In a scene with her mother, who mourned the death of an adult son, she asks if the feelings of grief and loss ever go away. "No" her mother says, "but it changes." "How?" she implores, and her mother describes the transformation of grief and loss into something that can be held, carried, like a brick in a pocket that at moments you forget until you reach down in and there it still is. The reminder. The loss. The brick.

I hold a brick in my own pocket, for the things that are lost to me because of Calvin’s circumstances, the things that he can’t do now—ride a bike, talk with his dad, tell me his dreams, play with friends, read a story, run in the yard—and for the things Calvin will likely never do—live independently, go to college, have children of his own. This brick is heavy and rough, cold, bulky. But in my other pocket I hold a flower that is forever blooming—that belongs only to me. Its supple petals are the ivory silk of Calvin’s skin and its fragrance is beyond imagination. As time passes this flower changes like a chameleon, becomes more beautiful and interesting over time.  Most of all this flower serves as a reminder of the wonderful gift that is my son, and gracefully—thankfully—balances the weight of the brick. 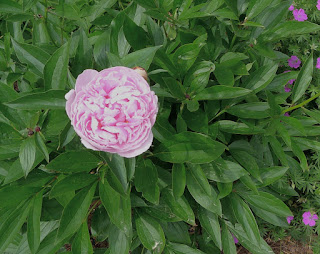