wrong side of the bed

Some days I wake up on the wrong side of the bed and the world is grayish-black. Today is one of those days. I’m not sure if I feel this way because of sleep deprivation, or being jolted awake by Calvin crying, which is unusual of late, or because of the worry of an impending seizure when he surprisingly fell back to sleep after crawling into bed with him. Perhaps my mood is the reflection of the dark sky’s unrelenting rains, my aching body that has been trying to stave off illness, or maybe I simply need coffee.

Whatever the cause, my funk is exacerbated by little things like Calvin yanking my hair, or his inability to use a spoon even though we’ve been practicing since he was two. He was better at it back then. Now he can barely hold the spoon and when he does he flicks yogurt everywhere, gets only some of it into his mouth and the rest of it all over his face and hands. Then it goes in his hair and on his sleeve. Goddammit.

Further ruffling my feathers is Rudy the dog whose face practically sits in my lap as I try to feed Calvin, his hot shit-for-breath wafting up from his needy face, and Neko the cat who, after already being fed, jumps onto every counter attempting to lap up our residual warmed milk, devour pieces of Calvin’s sausage or slurp up his yogurt with her prickly tongue. You’d think she had tapeworms. Come to think of it, when we found her she did—the vet saw them crawl out while she was being spayed—but perhaps the seemingly innocuous twenty-five dollar pill that we gave her to annihilate them didn’t work.

But now the house is quiet, Michael having gotten a chuckle or two out of me—as he is thankfully known for doing—and having encouraged me to get some more shut-eye, before heading to his studio. Calvin didn’t have a seizure. Rudy and Neko are napping. My tummy is full of warm steel-cut oatmeal, almonds and coffee, the sky is somewhat brighter, albeit still pouring buckets, and the writing has lifted my spirits some. But I think I need to go back to sleep so I can wake up again—but on the right side of the bed. 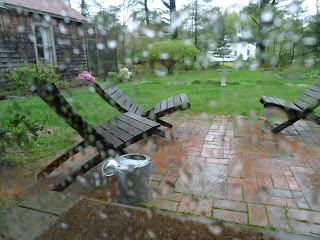