When Calvin was eighteen months old he said the word, "mama," clear as a bell. Michael and I were shocked, didn't believe that it was purposeful but rather more like a fluke of vowels and consonants tumbling out of his mouth in just the correct order as to make the word. He never said it again.

The closest Calvin has come since then to uttering any word is, "uh-uh," which seems clear is his way of saying "mama." He only says it from bed when I walk into the room to say goodnight or when he wakes up and wants me to come to him. Lately he seems to be saying it less and less. I wonder if one day it will vanish into thin air like so many other skills he's lost over the years.

It is beginning to appear, though—despite his incredibly poor vision and muscle coordination—that he might be capable of some sign language, something I never really thought he could master. Sign language is for deaf people, not legally blind people, I'd think. But his aides at school work hard at teaching him to sign for "more." He claps his hands together, which is close to that sign, though Calvin does plenty of banging and clapping that is hard to account for.

A few weeks ago Calvin was sent home from school with his usual daily progress report that logs his food and water intake, the time, size and consistency of his bowel movements and a list of activities he's done throughout the day. This way I can keep up with his gastrointestinal motility and appetite and make adjustments to his diet if I need to. At the bottom of the paper his aide wrote, Calvin signed for 'hug.' I was surprised and, to be honest, quite dubious.

But not long after, Michael and I saw it for ourselves when I was sitting across from Calvin feeding him a meal. He didn't use both hands like in the formal sign, rather put his left arm on his right forearm as he'd been taught at school. We had no doubt ... he was signing—asking—in true Calvin form, for a hug. I'm not surprised at all that hug is his first word since saying mama. He's just that kind of kid. 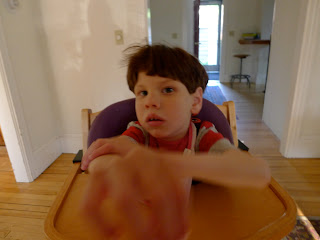 Posted by Christy Shake at 1:51 PM