I’ve always thought it mildly amusing that my girlfriend’s mother prays to Saint Jude for me. It's not the fact that she prays that I find amusing, but rather, who she prays to, because St. Jude is the patron saint of desperate cases and lost causes. Although Calvin was born with pretty serious afflictions I have never thought of myself—or him—as a lost cause. So I have to chuckle, but at the same time I appreciate her sentiments. I know she loves me. Perhaps she prays to St. Jude on my behalf because she might have turned to him when her two-year-old daughter fell into their pool and nearly drowned, was in a coma for six days and reverted to that of a newborn infant. The girl survived, perhaps miraculously, though more likely because her mother resuscitated her and saved her life. The girl is grown now and has a beautiful family of her own.

When Calvin was three or four, on one of our trips to his neuro-ophthalmologist in Boston, while in the waiting room I got to talking with a man who was there with his granddaughter. She had been born several months early, a twin whose sister had died at birth. In a thick, gravely South Boston accent he told me that the little girl had retinopathy of prematurity (ROP) a common visual impairment of preemies thought to be caused by oxygen toxicity (as I understand it, from artificial respiration) and/or hypoxia. I told him that Calvin was also premature and suffered from acute myopia as well as cerebral visual impairment (CVI), his white matter—the neuro-pathways—to a great extent absent.

The man, a ruggedly handsome barrel-chested, white-haired Italian, reached into his trouser pocket and plucked out a black velvet satchel with a satin cord and handed it to me, “this is for you to keep for your boy.” With clear eyes the man continued to tell me that the ivory rosary inside, though broken in places, had saved his granddaughter’s life and allowed her to see. “Now it is for you and Calvin.” I poured the beaded chain into my palm and regarded the crucifix. In the center of its engraved arms was a tiny inlaid brass-framed window, into which the man bid me to look. With one eye squinted I held the cross up to the light and peered in. Inside was a miniature etching of Saint Anthony of Padua holding baby Jesus in his arms. “Keep it with you,” he said, “it has brought us good luck.”

Once home, I Googled St. Anthony to learn he was Portuguese and that his patronage was to seekers of lost articles and the lost articles themselves. Was I lost? Was Calvin lost? Was Calvin lost to me? I wondered, reflected and conceded. I realized that I had often asked myself those questions at various moments—sometimes at once—wondering where it all went wrong. Would I ever get my life back? Would Calvin have a real chance at living a life with decent health, good vision or simply the ability to live seizure free without horrific side effects from the mountains of drugs he’s had to ingest into his perfect little innocent body?

Then, I remembered the trip Michael and I took to Brazil before we had conceived Calvin. Three sultry weeks we luxuriated in the vast romantic country tightly braided with European, Latin, African, and indigenous roots. We visited a church up the coast in Salvador de Bahia. In a small back stucco room hung milky wax relics—hollow arms, legs and heads—hanging from the rafters, some tied with ribbon and others with stickers bearing names of victims, of the ill, the wounded, the infirm, sent by their loved ones in hopes of a blessing and a milagre—a miracle. I tried to imagine what their God was doing about these poor, suffering, seemingly forgotten souls whose pocket-sized photographs plastered the walls in a grid resembling pixels in one of those gigantic portraits that are comprised of smaller ones.

Prayer, I’ve always thought, can’t hurt. It's no different, really, than sending out super mojo or positive vibes. After all, we're all connected in a gorgeous universal web of life formed from stardust. Though to be honest, with regard to praying to "Him," I question beseeching a God who lets little kids suffer, withholds mercy, allows pain, murder, torture, war, famine, poverty, genocide. Not a God I can believe in. And the argument of “original sin” and “free will” as the root of the world’s ills—freeing God from any culpability—is in my humble opinion, feeble—mans' attempt at explaining the unexplainable for his own comfort and an aim at keeping order, particularly troubling considering the presumption that God is all-loving and omnipotent.

Still, the rosary sits inside its little black pouch on my dresser, collecting dust along with a handful of smooth gray ringed rocks, half of a sparkling violet geode from a dead friend, the tiny baby oyster shell with its red ribbon that once looped around the platinum wedding ring I gave to Michael when I proposed, and a bowl full of dried lavender atop a wooden humidor containing letters and other mementos. I keep it because the old Italian man meant it for Calvin. But the only miracle I have yet to see is its minuscule image of St. Anthony de Padua behind a glass window no larger than the head of a pin. 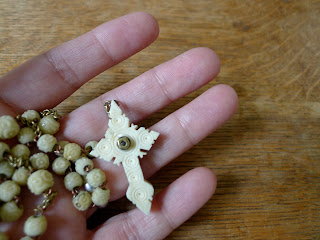