trouble on the bus

Outside, while waiting for the bus to arrive I followed Calvin around as he banged and patted the car—one of his favorite things to do. When I heard it pull up to the curb I grabbed his lunchbox and swiveled him around toward the bus. Calvin's driver, Cindie, startled me having leapt out of the idling bus to coax us along, something she never has done. “Hurry,” she said then explained, “One of my kids isn’t doing very well and we have to get him to school fast.” With a certain amount of understanding I picked up Calvin and quickly shuttled him to the top of the bus’ stairs, passed him off to an aide and told him, as I do every day, “Bye Calvin, I love you.”

As the coach pulled away I peered up into each window trying hard to discern the trouble through the glare on the glass. Several seats back sat a boy a boy a year or so older than Calvin, a boy who was his classmate in preschool and kindergarten. This boy, amongst several other children in Calvin’s class, also has epilepsy, has a history of being hospitalized for bad seizures just like Calvin, but I couldn’t be sure if he was the child in distress. The bus sailed away and as I trudged up our driveway I began to cry. Michael intercepted me with an embrace. We were feeling the same emotion ... despair for the anonymous, unwell child on the special needs bus.

Back in the kitchen I halfheartedly poured myself a bowl of cereal and milk. Our visiting teenage niece, Maddie, wandered into the room, saw my tears and asked, “Why are you so sad?” I looked over at Michael whose eyes were red and moist and I began to cry some more. Through my weeping I told her about the incident on the bus. “It’s just that these kids are so innocent. They don’t deserve or understand what is happening to them. They just feel bad and they can’t even tell us why.”

We all stood quietly in the kitchen lamenting the reality that Calvin shares with his classmates, hoping the ill child would be okay and thankful for the childrens' amazing bus driver. I finished my cereal in silence listening to the miserably hollow din of my spoon against the empty bowl and thinking of the heartache I feel on a regular basis mostly because of epilepsy.

Please share and bring us one step closer to a cure for epilepsy.
Give to cure epilepsy: http://www.calvinscure.com 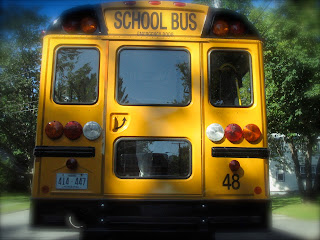