Today I'm having a pity party, all by my lil' old self. Waaaa! I threw it together at the last minute, just after I "slept in" until seven and rushed downstairs, in a fog, to count out Calvin's nine morning pills before it was too late. I quickly tossed back some of yesterday's cold, sludgy coffee then went to get him up.

My husband is away today, which makes my pity party even more pathetic. I have no one to gripe to about Calvin's irritable morning mood. I have little to no idea why Calvin is whining but he probably feels like hell for some reason related to his seizure meds. And, he doesn't want to eat (what's new?) So, after I encourage him to take his pills, I release him from his stockade and walk around behind him like the caffeine-deprived zombie that I am, making my best effort to prevent his baubblehead from banging into door jams. Between slurps of dead, gray coffee I thwart his countless attempts at biting everything in sight (I figure it's easily over 50,000 times that I've said, "don't bite that, Calvin") and it's getting really old. Waaaa!

My wiser side thought I should try to break up my pity party, which, though I do sometimes wallow in them, are really not much fun. So I loaded the kid into the car and headed out to the donut shop. There's nothing quite like grease and sugar to perk up one's spirits on a Sunday morning, except perhaps a Bloody Mary. Once parked, we made it no more than about three steps before Calvin refused to walk any further and "asked" to be picked up. I knew we'd be lucky if we got across the street without being run down by some out-of-towner speeding through Vacationland. I could barely see straight between attempts by my eight-year-old at head butting and yanking my hair out in clumps. This is Calvin's way of telling me that he isn't feeling well. Half way across, in front of an idling gang of motorcycle buffs—my pity party still in full swing—he belches. All is better.

Inside the shop, a quick gaze at the shelves behind the counter tells me that my favorite donuts are sold out. Waaaa! Luckily for me, Frosty's knows how to treat their customers, so Shelby slathered a cruller with chocolate icing and slid it into a bag. Calvin's mania had subsided enough that I thought I'd try sitting next to him in the booth. Between bites of my donut he sat and banged the hell out of the table marking it with little chocolate fingerprints and drool. But hey, at least he was happy, and I started feeling the sugar-high, too.

But back at home I crashed. My pity party perpetuates, pining for my paramour, deprived of a plethora of pleasures practically every other parent and their progeny is partaking in at this point: hiking, beach-bumming, fair-going, window-shopping, picnicking, swimming. Heck, these days eight-year-olds can probably go to the playground or to a friend's house all by themselves, as long as they're wearing a bicycle helmet. Not my kid. Waaaaa!

Instead, I'm sitting here writing as Calvin wakes up from his nap and bangs the shit out of his bed's safety panel. The perfect background music to a most pathetic pity party, indeed. I think it's time to call the Waaambulance! 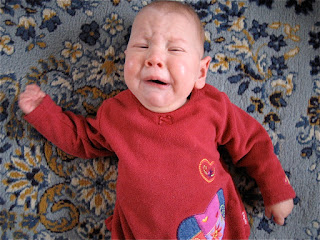 Posted by Christy Shake at 2:40 PM