splendor of the normal

For as long as I can remember I’ve loved kids—kids my own age, older kids, younger kids. At eighteen, when I was still pretty much a kid myself, I coached a team full of rowdy swimmers—over a hundred of them, all of whom I adored. The youngest was only four years old and a handful of others were mere months younger than I. I relished coaching every one of them—the slackers, the mischievous, the over-achievers, the uncoordinated, the all-stars. Each had something special to offer; they all enriched my life.

This week, for three days we were graced with the presence of our new friends who were visiting from Virginia. They brought with them their sixteen-year-old son, thirteen-year-old daughter and eleven-year-old fraternal twin girls. It was a gloriously full house. A few minutes after their arrival Michael asked the children if they’d been apprised of Calvin’s health issues. Soberly, the four youngsters nodded yes. And as Calvin spun and screamed and grunted like a little monster in his Johnny-jump-up the children didn’t stare or gawk. They were kind and curious, seemingly eager to be amongst us. And I was eager to hang out in their splendor of normal (though to be honest these kids are exceptional) and to open myself up for pangs of sorrow and of joy, to allow the kids to expand and squeeze and swell and tear my heart into little pieces. That’s just the way I wanted it.

During their visit my mind took little snapshots, morsels of life’s moments with the kind of splendidly normal kids that I don’t have:

Hanna: (to her sisters) with a mouthful of lobster dripping butter down her chin asks, “How can you guys NOT love lobster ... aaaaarrrghhhh?”

Elizabeth: striking an exquisite yoga pose on a grassy hillside sloping down to a backdrop of blue pond and puffy white clouds.

Kate: embellishing (often) on her love of Klondike bars and gelato.

Robert: waxing philosophical on most any subject that might be bouncing around the dinner table.

Hanna, Kate, Elizabeth and Robert: sitting in the living room quietly reading books, and, as I walk past with babbling Calvin, Kate (laughing) says something like, “He doesn’t know a word of language.” I recoil until I realize she is referring to the character in her book, and not to Calvin.

Hanna: (to my Michael) “You guys are great parents,” to which I secretly begin to cry in the stairwell clutching Calvin.

Hanna: telling me how she wants to be a doctor or researcher, Elizabeth, a dancer-actor-model-singer-lawyer, Kate, an architect, Robert, perhaps a scientist. (I might have these mixed up, but you get the gist.)

Kate: telling us how fun we are.

Me: feeling exactly the same about them and wishing they didn’t have to leave.

Their happy, energetic engagement with us filled a huge void in my life, if only for a few days. It made me crave it for myself while at the same time it stressed the sharp and bitter contrast to the life we lead with Calvin who—totally drugged up—still has seizures, cannot talk, and cannot walk without our assistance. But while the disparity between our daily experience stings, I wouldn’t trade those precious moments with that bunch of lovely kids who brought me a glimpse—a shot—of some much needed splendor of the normal. 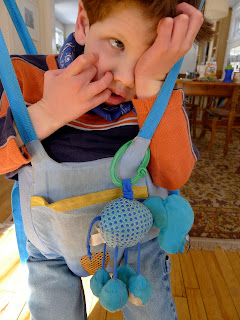 Posted by Christy Shake at 2:53 PM