the trouble with drugs

These drugs are the bane of my existence—of Calvin’s existence—in some ways perhaps more so than the seizures themselves.

After Calvin’s epilepsy diagnosis, when he was barely two years old, an adult neurologist prescribed his first anticonvulsant drug, Trileptal. Calvin went berserk (the neurolgist had prescribed a dose twice what was appropriate for Calvin’s weight) so after three days a pediatric neurologist recommended we change to Keppra. Six months later, after a life threatening forty-five minute seizure, we switched Calvin to a third drug, Depakote, which caused him to become a zombie, losing many of the skills that had taken him months, if not years, to acquire. When the Depakote failed to control his seizures and began adversely affecting Calvin’s liver we put him on three new drugs all at once—Lamictal, Clonazepam and Zonegran—increasing them every few weeks until he was at or above a therapeutic level of each. But then Calvin started having a different kind of seizure, a tonic-clonic (grand mal) seizure, which became his most common type. I have little doubt that the advent of these seizures was due to a toxic level of Lamictal.

After three years on three drugs (while trying two dietary treatments as well) yet still suffering a dozen or more tonic-clonic seizures every month, we began weaning Calvin off of the Clonazepam, an addictive relative of Valium, which caused him to have withdrawal seizures nearly every day. So we added on a fourth anticonvulsant drug, Clobazam, purchased from Canada and which eased the withdrawal and allowed us to slowly (like molasses) wean Calvin completely off of the other three.

A relatively low dose of the Clobazam worked well to squelch his seizures for a while, but the honeymoon never lasts forever and the seizures began increasing again. So every time Calvin had a cluster of them we increased the drug. Eventually, when it appeared we had nearly maxed out the Clobazam’s efficacy (and Calvin’s ability to withstand its side effects) we chose to add a second drug, Banzel. The seizures plateaued, then started to increase again so we added a third drug, one he’d tried five years prior, Keppra.

This last Spring, we changed to Keppra XR (extended release) thinking it might eliminate the stubborn seizures that kept occurring at the same time of day, just before his evening dose of seizure medication. Sadly, that didn’t solve the problem but instead caused us to regularly peel Calvin off of the ceiling, so we recently switched back to Keppra regular release. Now we are waiting to see the results, and planning to reduce the Keppra some since Calvin is still a manic little eight year old bag of bones, no doubt in my mind because of the Keppra. The sickening catch-22 is that Keppra’s the drug that has seemed to control his seizures the best.

Calvin has tried nine different courses of anticonvulsant drugs in six and a half years. The weaning process can take what seems like forever, changes so incremental so as not to trigger a life-threatening spate of seizures. And, the trouble with drugs (besides the fact that most people with epilepsy have to take them) is that it’s anything but clear which meds are helping reduce the seizures and which drugs are causing which of the heinous side effects. It’s always a gamble when deciding to reduce or increase any drug.

I guess what I’m trying to say is that the trouble with drugs is the effing drugs. 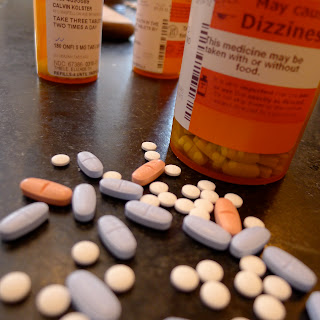 Posted by Christy Shake at 3:12 PM