Summers in the Seattle suburb where I grew up were gloriously warm and dry, contrary to what some might tell you. I’d cast a towel over the brittle yellow grass in my back yard, slather myself in oil and set my transistor radio close to my head. But when my family took trips to the coast, about three hours from our home, I’d leave the oil behind and bring an empty medicine bottle full of dimes for the showers, knowing how sandy I’d be getting.

On these trips my dad woke us early to go digging for razor clams. My brother Matt crawled out of his mummy bag and jumped down from the little shallow loft at the end of our trailer. I’d follow eagerly, shaking off the night’s claustrophobia having been hemmed in by my brother with only a few inches of headroom and a tiny window that barely opened. We donned cutoffs, sweatshirts, canvas sneakers and an occasional poncho, toted buckets and dragged our shovels carving swerving ruts into the beach. We trudged after my dad’s tall, thin figure—stepping into his footprints—and waded out to the sandbar, a long slice of beige a billion grains strong molded into wavy ripples like sub-Saharan dunes. In the frigid water our feet went numb and sand chafed our ankles raw. Our hard-heeled strides sent the clams asunder, one short squirt from their bivalves giving them away. Then we’d dig.

In the afternoons some of us flew kites and jumped off grassy bluffs into the dunes, others collected sand dollars and squashed bronze kelp heads. One time my brothers and sister flew a kite 1,500 feet into the sky, its heavy line sagging in a deep crescent, the kite a mere dot floating in the blue expanse. We listened to it hum in the wind, holding the whining string up to our ears. I was excited, but afraid to take hold of the kite for fear it would carry me away.

All excellent swimmers, we dared to stroke out past the magnificent breakers, then we'd body surf into shore and bury each other in the damp sand. The first time my brothers buried me I remember being surprised at the weight of it, of the pressure on my chest and the way I could barely move my limbs under its mass.

I had long dreamed of reliving some of these fond childhood moments with my own husband and child. In a blink, however, that all changed when Calvin was born with significant neurological problems, and more so when he started having seizures. And though my life is rich and wonderful, full of love and happiness, we’ve had to do everything very differently than we had hoped, had to relearn how to live our lives in the face of the grief, loss and hardship of a having a disabled child, like someone who must relearn how to speak after suffering a stroke, how to trust after being jilted by a lover, or how to walk after loosing a limb.

Two summers after my dad died I made a dear friend while living in San Francisco. We spent nearly every weekend together that summer, and into the fall, taking photos for his book on the environmental history of the Bay Area. He shared with me all sorts of stories about his native home, showed me hidden waterfalls and ponds with rope swings and wildflowers on mountainsides. On one of our hikes he told me about a day at the beach when he was just four. His father, who must have been a young man then, had ventured to carve a tunnel through the sand, not unlike the igloo my brother Matt and I dug out of a gigantic snowball once. My friend was watching his father burrow his way through to the other side of a moist sandy hill when it collapsed. His father was entombed, no way to get to him, and he died.

My friend’s life—his mother’s life—would never be the same again, like some train that’s been derailed, cars careening to one side, perhaps skidding off the edge of a trestle spanning a deep gorge, or slamming head on into the side of a mountain. It’s hard to say how a person perseveres through such adversity, except that we, as humans, are adept at relearning, at exploring uncharted territory, at daring to navigating foreign waters and at swimming strong out past the breakers where the waves are smooth and rolling and one can clearly see the horizon again. 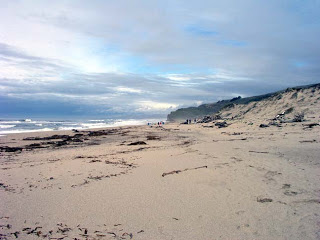