The house was packed with music fans, mostly bespectacled, white-haired and balding, though plenty of younger folk, a few students and one or two restless babies. They wore felted wool coats, silk scarves, silver and gold and gemstones, fashion denim, flannel shirts, cordovan shoes and sleek waterproof jackets with reflector tape and velcro. They’d come from cozy restaurants or from home where wine and beer might've been served alongside plates of warm food and glasses of cold, clean water. Perhaps they’d had dessert, perhaps not, but there had likely been a choice. No doubt, many had smart phones in their palms, watches on their wrists and money in their wallets.

A few arrived in leather scented cars with seat warmers to take the evening’s damp chill out of close fitting slacks or lycra leggings. Others walked through the mist under dripping pines and maples just beginning to bud. They were warm and dry, their bellies full, and ready to devour some extraordinary live jazz in a clean, comfortable, climate-controlled college theater. I happened to be one of them and, seated next to me, Michael was another.

The music, a quartet of piano, upright bass, drums and banjo, moved me both literally and figuratively. I cannot do it justice with words but to say that I lost myself, even if just for a moment.

Once home and in bed, I rested my weary head in a perfect spoon of down pillows, pulled the comforter up around my shoulders and closed my eyes. I fell asleep with the sweet sound of music still humming in my head only to be woken minutes later by a semi-conscious boy banging his head against the padded safety panel of his bed. Muttering a string of grumpy obscenities I scooted into the next room, unhitched the netted canopy, laid Calvin back down and covered him so that he could get back to sleep.

My wretched complaints followed me back to bed where I half hoped Michael was awake to hear them and half hoped he wasn’t. I stewed and steamed for a bit, then looked out into the night and thought about Ronan’s mothers sleeping under a New Mexico sky without her little boy because he died a few months back. I thought of the murdered Sandy Hook children whose parents and siblings were awake with insomnia or asleep in their Connecticut homes, the empty beds of those lost in the next room. I thought of the hundreds of garment workers crushed in the Bangladeshi building collapse and the difficult lives they’d lived up until then. I thought of the tented cities of Haiti, the Syrian crisis, the masses of people living in war, depression, squalor, oppression, fear, anxiety, threat, burden, loneliness, uncertainty. I thought of those living lives with no money, no food, no heat, no shelter, no water, no healthcare, no job, no freedom, no safety, no opportunity, no future.

Then I thought about how ridiculously lucky I am—we are—and that even though I have a disabled child with medically refractory epilepsy, I have nothing really to complain about in the scheme of things. And then my anger and frustration dissolved like water droplets into the lattice of pines standing stark black against what appeared to be a non-threatening, shimmering white sky. 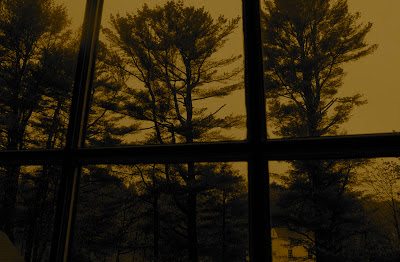