The first time I understood tolerance, of the technical kind, was when I learned the craft of designing and producing clothing. Tolerance, in the manufacturing world, is the allowable variance of any given product specification. A disparity beyond the tolerance (for example, an inseam that is too long or too short) is said to be non-compliant and can be rejected by the wholesaler.

Shortly after Calvin began taking drugs for his epilepsy, I learned there are also tolerances in the pharmaceutical world, which is a scary thought at best. This accounts for why some people with sensitive systems or fragile seizure thresholds like Calvin may not do well using generic forms of drugs compared with the brand name versions.

Recently, I faced this problem once again when I picked up Calvin’s synthetic thyroid medication from the pharmacy. I’ve made a habit of opening all bottles before leaving the pharmacy to make sure they’ve given me the correct pills since I’ve learned that this isn’t always the case. This time the pills, though they appeared the same soft lavender color, were a different shape. I asked why, and the pharmacist told me that a generic version had been substituted because the brand name pills were back ordered. She confirmed my fear about the tolerance, so I asked her if there was any other option. She suggested we might try a different brand name drug. At my request she called Calvin’s endocrinologist and pediatrician and the prescription was changed to an alternate brand name drug, ostensibly identical to the one he’s been taking for eight years. I remain dubious.

My fear in using the generic is multifaceted. First, Calvin is enjoying a long seizure-free stint of over thirty days. Calvin’s thyroid levels have been stable for years on the same dose of synthetic thyroid medication and I hate to upset this balance because who knows how that might translate in his body, in his brain. Also, changing drugs adds yet another variable to the conundrum of Calvin’s physical and behavioral symptoms and general well-being, which are difficult to ascertain, making them nearly impossible to assuage.

And, so, with no other acceptable alternatives, we will begin using the new drug in a few days, to be followed up with blood work in the wake of the change to ensure Calvin’s thyroid levels remain within the normal range. Cross your fingers and knock on wood.

Tolerance? When it comes to these drugs that I have to give my kid, I don’t have much. 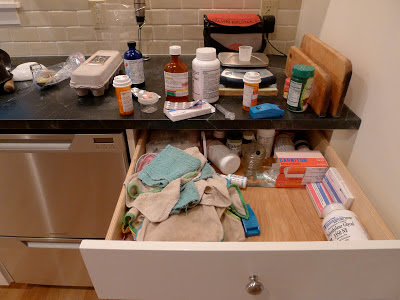 Posted by Christy Shake at 2:10 PM