We slogged across a street glazed in gritty slush, the sun having just set. Michael hoisted Calvin to his hip while I carried a bottle of champagne for our neighbor-hosts. Once inside, we stripped off our winter gear never letting a hand off of Calvin. I introduced myself and my boys to a few guests who were seated next to a large Christmas tree dripping in silver tinsel. I didn’t catch everyone’s name—I rarely do these days. There was a blond woman in her early thirties, a woman who must have been in her seventies sitting alone in the corner and a younger man in a Christmas sweater slouched in an oversized chair. Calvin cruised into the living room at the end of his harness and I knelt to gave him a hug, running interference between him and the bowls of candy on the coffee table.

“You’ve got your hands full,” the man in the chair commented with a smile. I agreed. We small-talked for a bit then Calvin lead me into the kitchen. “Nice knowing you all,” I said in jest, and the group chuckled in our wake.

Once in the kitchen, Calvin made a beeline over to our host Brian, a burly man about six-foot-six-inches tall. He crouched to receive our boy, who wrapped his arms tightly around Brian’s neck. “His arms are pretty strong!” Brian noted, and I told him he was lucky he didn’t have long hair for Calvin to pull.

Soon, Michael, with beer in hand, took Calvin from me and they teetered between stove and counter and table and chair, not unlike we do at home. I met Kim and Chris and Rosalee and Kevin and another Kim. Child free, I was able to give our wonderful hosts, Joanne and Brian, proper hugs, sip a glass of wine and pop a couple of hot pigs in a blanket into my mouth. I felt all eyes upon us, though in a good way. Everyone was warm and welcoming and interested in Calvin, though not overly so. Now and then a curly-headed girl no higher than my knee weaved her way through the crowd carrying a paper cup full of foil-wrapped chocolates. Her agility amazed me, didn’t seem possible for a child so young.

One of the Kims, when I told her of Calvin’s epilepsy and our quest for medical marijuana, told me she was partly responsible for legalizing it in our state. I told her how awesome that move was. She went on to characterize it as a libertarian thing. “Well, I don't know about that,” I replied, adding that I thought it was simply the right thing.

As Calvin flopped like a fish on the floor at our feet the group of us joked about aging bodies, twenty-foot artificial Christmas trees, storms coming, drug side-effects, in-town living, ice-fishing and children. I finished my wine then gathered our hysterical, giggling, drooling kid off of the rug and motioned to Michael that we should head home. Another family arrived just as we were leaving and, outside, we passed a few other departing guests. One of them, Kevin, a nice man with tight curly hair, neat facial stubble and an earring, called and waved, “Goodbye Calvin!” My eyes began to mist, and as we crossed back over the street to our house I said to Michael, “Strangers rarely do that, do they?” to which he replied, “Nope.” And as I skated through the sandy mush I was grateful for all of the Kevins in the world, and the Joannes and the Brians and all goodhearted neighbors, friends and strangers alike. 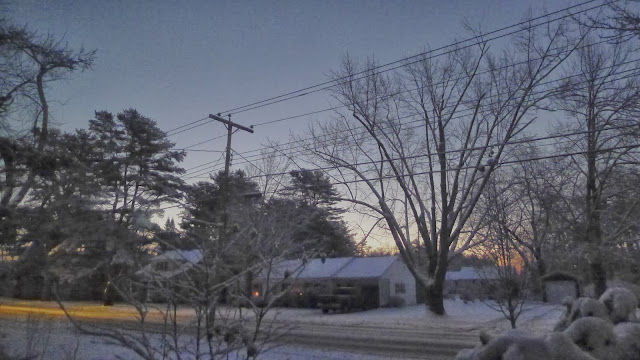 Posted by Christy Shake at 2:27 PM