Water drips off the tips of icicles to the ticking of the clock. The wood stove creaks as I sit curled up on the couch with my worries, listening to a wordless kid trill and spurt and cough and shriek, his clatter drumming against my brain like the roll of impatient fingers.

Last night’s bath had been warm, perhaps overly so. The smell of a roasting crown of pork wafted up the stairs into the bathroom thick like soup. Calvin excitedly kicked and splashed, capsizing several times, his foam helmet inching down over his eyes but protecting his head nonetheless.

Quarter to five, I thought, almost seizure time, as my boy quieted and stilled in the water. I peeled back the clear plastic curtain to regard his face, which had flushed like a rose, his eyes rolling back into their sockets as if he were about to faint. “He’s having a seizure!” I called down to Michael who leaped up the stairs within seconds. Together, we lifted Calvin out, laid him naked on our bed. We watched convulsions surge through his body in waves, watched him gag, his lips, fingers and toes turning greyish-blue like death. My poor little merman, I thought, as I stroked his smooth skin calling him back from the abyss.

After five minutes it was over, then he slept twelve hours through the freeze and the thaw.

Today he is intensely crazy and stubborn, exhibiting many of the signs that seem to precede a seizure. The full moon is waning as it does so often on seizure days, perhaps coincidence, perhaps not.

Outside, the temperature sinks with the sun, the trickle slows, the drips soon freezing into knives. There is an ice storm coming, like on the night Calvin was born. In a few hours everything will be caked in it, layers of ice masking the trees in crystal bark, pine fronds becoming frozen fingers, glazed windows and doors iced shut. A thick, shining crust already glosses drifts of snow. It’ll be so silent part of me might hear the crystal fractals forming over glass in patterns of waves or whitecaps, while the rest of me will be listening for Calvin’s shallow breath. 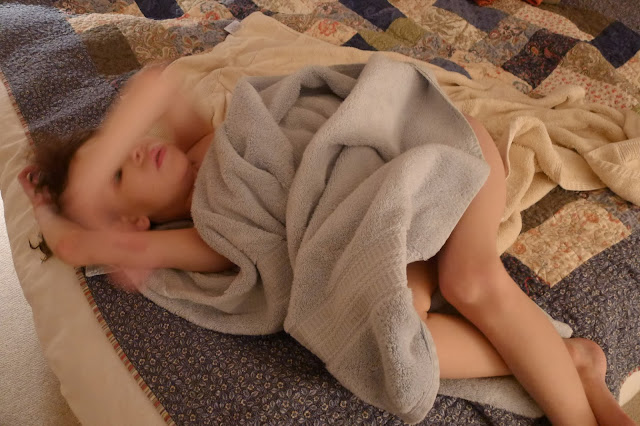