This morning at six-thirty, my fifty-fourth birthday, I was awakened by the chilling scream of my child going into a grand mal seizure. Its spasms were more violent than usual and it seemingly lasted slightly longer. When it was over I crawled in next to him. There, I am able to hear his heartbeat through the pillow. Not long after he had fallen asleep I sensed his heart rate quicken. No doubt in my mind he was about to go into a second seizure, so I grabbed the syringe of THC rescue tincture and squirted it under his tongue, successfully thwarting another one.

This, the fourth day of various kinds of seizures within six days, finds me weary. Somber weather matches my mood, and yet I am thankful for the rain that is drizzling on trees and shrubs so deprived of water that they've curled up into themselves.

Later, while still in my robe, a knock came at the door. Michael had already left for a day's work. In came my lovely Lauren with a bouquet of flowers from her garden—zinnias, snapdragons and geraniums in the juiciest of colors. In her other hand she held one of her creations, a soul collage, in which she pastes cut-outs from glossy magazines, arranging them in space on a two-sided card wrapped in cellophane.

A mere glimpse of the collage got me to me weeping, just seeing the boots, a nod to my many pairs, in particular to the pointy-toed studded ones—ass kickers—Lucretia gave me. Lauren had included a woman in rolled up jeans—the way I like to wear mine in summer—reading a book against a backdrop of birthday candles and an autumn scene complete with the acorns so profuse in these parts during early October.

She embraced me as I wept. Over her shoulder I studied the backside of the card which features an auburn-haired woman surrounded by flowers, another sitting on a throne of pillows, her hand on a bow as if a warrior, and a third woman standing on a large ball juggling six smaller ones. In the make-believe room, there are books and baskets and ornamental rugs and a familiar pair of French doors leading into a canopy of trees. I was deeply touched by Lauren's thoughtfulness and insight expressed in her postcard homage to me, my life and my home, a place I often feel stranded in, and yet one I am reminded to be most grateful for. 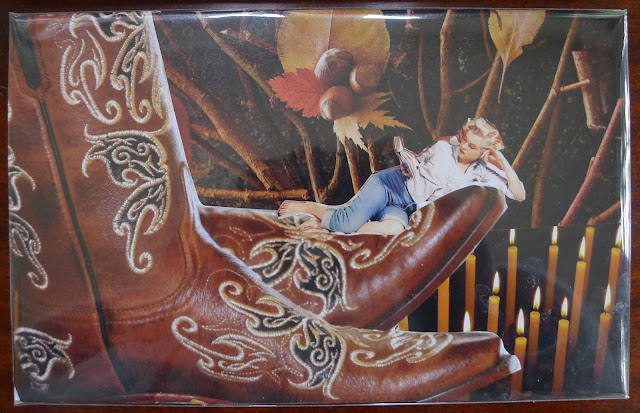 Posted by Christy Shake at 1:23 PM