At five-ten it was the crash that woke me, instead of the scream, my son's rigid body bashing into the side of his bed. It was his second grand mal seizure in as many days, even though last night I had strayed from my intent on not giving him the concentrated THCA tincture as he slept. I had a feeling another morning one was coming.

He'd been exasperatingly whiny from morning until bedtime yesterday, testing my limited reserves of patience due in great part to the effects of some serious sleep deprivation. I had snapped at him more than once, angrily shushing him, hungering for him to shut the hell up, at times shamefully telling him as much, at others, surrendering and folding him into my arms in love. I got frustrated with his restlessness, with his stubbornness, with the awkwardness of a strappy velcro boot splint the doctor had given him for his injured foot. I wasn't sure of the source of his distress, asking myself a battery of questions:

is it the new cbd oil? is it a tummy ache? a sore throat? does the boot fit? does he have an infection? is it a post-ictal funk? why am i such a jerk at times when he probably feels like shit?

I was in denial that his misery might be due to another impending seizure even though he'd had one that morning; grand mal seizures on consecutive days are not unheard of, but rare for Calvin. Nevertheless, I should have known. He had shown many of the omens: rashy butt, whininess, stubbornness, confusion, not eating or drinking, not pooping even having given him suppositories to help.

In the wake of this morning's seizure, I gave him his clobazam plus another dose of concentrated THCA tincture. Thirty minutes later I got him to take his Keppra. Soon after, he awoke to a partial complex seizure so I gave him a dose of THC rescue med, which works well, usually, to stop the barrage of wicked fits. I took his temp. He had a low-grade fever, so I gave him an acetaminophen supp. Those remedies seemed to tie him over, though he still wasn't himself, and at seven-ten he went into another grand mal, only the fifth daytime, conscious-onset one he's had in over three years. Michael had already left, so I made a judgement call and gave Cavlin the rectal Valium aiming to stop the cluster of fits.

My sweet boy is sleeping now. Outside his window I can see that the rain has just let up. Like my boy, the trees are nearly motionless and beautiful as the world around them wakes up. A blue jay hops from branch to branch sending a cascade of rain drops in its wake. The clock ticks by another second of a day in which this wicked epilepsy made up for a nineteen-day seizure-free stint. 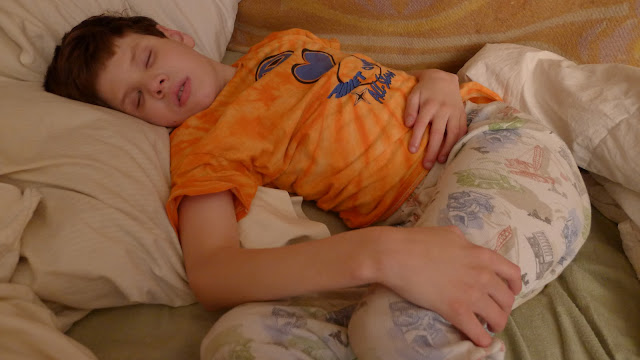