a call to disarm

From the top of the hill in our handicap parking space next to the church, we could see the crowd gathering around the gazebo. Folks had taken the parade route, marching from the far side of the green bridge that crosses the river dividing our town from its neighbor. Hundreds had gathered, some of them in puffy jackets, scarves and hats, young and old, many holding handmade signs in honor of the cause. A handful of the signs read:

I want to read books not eulogies.

School is for learning, not for lockdowns.

What part of "assault rifle" do you not understand?

End the silence, stop the violence.

From the start, Calvin was thankfully compliant, holding hands with me and Lauren as we walked down a stretch of road he'd never travelled along by foot. When we reached the crowd, however, there was little room to move, prompting Calvin to attempt dropping to the ground; I had to quickly find a place for us to sit down. Squeezing between onlookers, we inched ourselves awkwardly down a small hill still covered in snow, eventually making our way over to the gazebo. There we sat, off to the side on one of the bottom steps near an elderly woman resting there, a nubby scarf wrapped around her head. To keep Calvin calm and in one place I offered him a snack, wiping his face between bites of fruit and sips of juice. From our perch, we could see the entire crowd whose somber faces were fixed on the stage watching students read brief eulogies of the seventeen victims of the Marjory Stoneman Douglas High School shooting in Parkland, Florida last Valentine's Day. Under white skies, many of us wept.

Calvin was as patient as I could expect; he remained seated long enough for me to hear a few of the students' speeches condemning gun violence and vowing to vote out legislators bound to the NRA and unwilling to back gun-safety measures. Before we got up to leave, the woman seated next to us, who told us her name is Virginia, asked if Calvin is my only child. I replied, yes, explaining that was both good and bad. She looked as if she might cry. At that moment, I wondered how many of the kids killed in school massacres were their parents' only children and, because of Calvin's grave disabilities and chronic illness, I could begin—if only slightly—to imagine those parents' loss.

As Calvin and I skirted the crowd I spotted Lauren standing at the side of the road with a friend, both of them wielding signs for passing drivers to see. When we reached them, a middle-aged driver slowed his car to a stop, rolled down his passenger-side window and began shouting at us. His face became red and spittle flew from his mouth. With two fingers raised, he angrily defended what I assume he thinks are his unfettered second amendment rights, the twisted notion that the words "well-regulated militia" somehow guarantee his absolute right to own firearms, no questions asked.

On the drive home I remembered dropping Calvin off at school last Friday, noticing that the large windows of his street-side classroom were no longer papered over. The only remnant of their previous sheathing is a big and beautiful brown-paper tree, its trunk sturdy, its branches spreading wide and free. In seeing that the paper shroud had been removed, I felt grateful knowing that these terrorists and would-be terrorists—because their young, White, Christian, suburban, love-stricken or lonely or troubled souls should not exempt them from being labeled terrorists—don't have a stranglehold on our community or on our collective call to disarm. 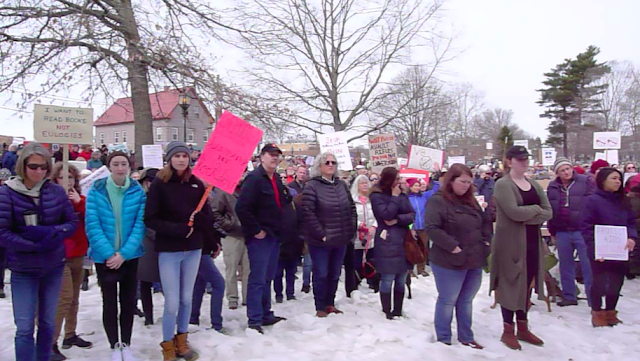 Posted by Christy Shake at 9:37 AM