If you look closely, you'll see me in there somewhere, the edge of my mostly-auburn hair mingling with leaves and twigs, baggy bloodshot eye, wearing my shabby blue fleece robe that our neighbor thinks makes me look like a ward from an insane asylum. His estimation is fitting. One of us might be heading there, Calvin or I.

After yesterday's string of partial complex seizures—one every hour from eight-thirty until two—Calvin was impossibly restless on either side of last night's grand mal. This morning he is still unhinged, his repetitive humming and growling having not let up after hours on end. The kid is certifiably nuts, and he's sending me there. Both Michael and I tried sleeping with him, hoping to calm his inner demon so that everyone could get some rest, but because of Calvin's derangement, which must be some sort of benzo withdrawal symptom, sleep proved elusive for all of us ... again.

While walking Nellie yesterday in near-freezing, bone-chilling winds, I sat on a stump in the sun. It was then that I noticed my right eye hurting. That morning, Calvin had inadvertently stabbed it with several rigid fingers. Each time I blink, it hurts. Squinting, I looked out over fields, still covered in snow and flanked on all sides by naked oaks, maples and white pine of the same size—a wall of trees, really. Much of Maine makes me feel this way: walled in. These parts are mostly flat, and considering how close we are to the ocean as the crow flies, it takes some driving to get to a place with a decent vista much less a wide beach or clear view of the open sea. The experience I have at home raising Calvin, hemmed in by these four walls and by his condition, is the same one I have in Maine. I think I'll call it hemmed-in syndrome.

Perhaps if I were younger and not in love I'd run away from my reality. Last night things were very nearly as bad as it gets save trips to the hospital or the hours of night terrors Calvin sometimes suffers and we somehow cope with. It's these times when I imagine leaving my family behind and escaping to a place with mountains and hills right in my backyard, with ample and easy views of horizon meeting sea, of endless beaches minutes away and springlike weather year round. I'd go somewhere cosmopolitan where throngs of people busy the streets, where restaurants are bustling, where there are decent cafes and gorgeous parks in which to linger and explore, and interesting neighborhoods through which to tread for hours. I'm talking about a place like my beloved San Francisco. Maybe even LA. Perhaps some day I'll get back there and stay.

But for now I am here at home, today with my manic child. In doing endless loops with him around the house this morning, he stopped and I stood to block his incessant staring at the sun. Looking up, I saw this photo on the wall, one Michael made a couple of years ago. In its glass I saw my reflection, though dark, as well as windows through which I could see trees and light from outside. I exchanged tepid coffee for camera to capture the image. Then I dove into the windy scene of branches, leaves and sky—but for a divine moment no longer hemmed in—becoming a virtual traveler through time and space to a place without Calvin or angst, sleeplessness, seizures and mania, far beyond these walls which hem me in. 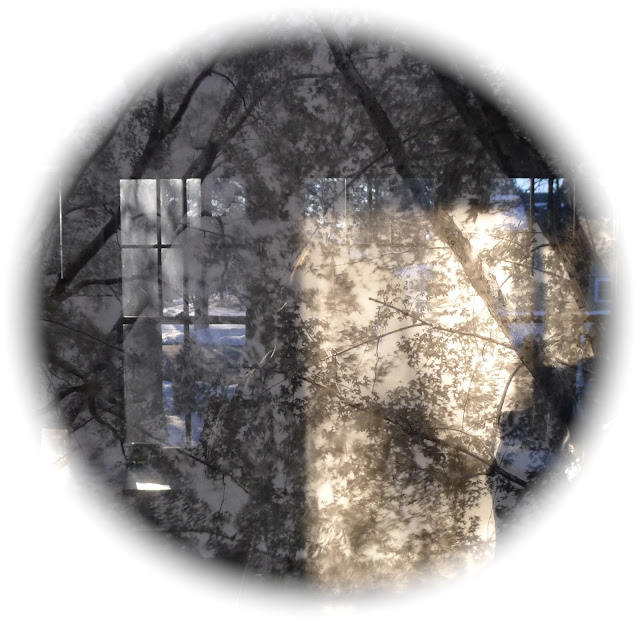