Stepping outside behind Nellie, mug of coffee in my hand, I thought to myself, I shouldn't go outside until Michael's done in the bathroom. Still, I went, leaving Calvin unattended in his jumper, if only for a moment.

In the soggy garden, mosquitoes flitted around my head. Limbs were dripping with last night's rain. The earth was shrouded in mist, birds and crickets chirping. Partway through my stroll I heard Michael shout for me. I knew what was wrong, so I sprinted across the lawn, slopping coffee into my rubber boots as I did.

Entering the house I called, "What kind?"

"Grand mal," Michael answered, just as I saw him struggling to yank our convulsing boy from the jumper, his crooked limbs tangled in its straps.

I ran to the fridge and grabbed a ready-made partial syringe of Palmetto Harmony CBD cannabis oil to give to Calvin once the seizure stopped, aiming to prevent further ones. I thought about giving it rectally, a method its maker had suggested to stop seizures or clusters of them, owing to the cavity's rapid absorption.

The seizure was typical in every way except that its onset was while Calvin was conscious, which has only happened three times in the past four-and-a-half years since introducing a homemade THCA cannabis oil; all other grand mal seizures since then have occurred while he's been sleeping.

Today is the fortieth morning since Calvin's last grand mal, one of his longest stints ever between convulsive fits. I'd seen a few harbingers of an imminent one yesterday—rashy butt, eye poking, some grousing, intense hugging, fingers in his mouth and in mine as if trying to tell me something. While changing his first diaper this morning, I noticed his right eye turning inwards more than usual, then I watched both of his eyes panning back and forth. I made a mental note, thinking he might be heading toward a partial complex seizure, the kind which are more common not long after he wakes up.

Though it's uncommon for Calvin to suffer a grand mal after he's woken, I'm not that surprised. Seems ever since Calvin's epilepsy diagnosis twelve years ago, the seizures have a way of migrating away from higher doses of medication. We've been giving him his CBD oil—the medicine to which I attribute this very long stint free from grand mals—just at night. I've read that CBD's half-life is nine hours, so it makes sense the seizures might start appearing in the daytime.

After Calvin came out of the fit, I slowly squirted in half his nighttime dose of CBD—10 mgs. Tomorrow, I may start giving him small doses of it—0.25 mls equal to 5 mgs CBD—every morning to see if we can control his a.m. seizures.

Our boy is resting now. I hope with all my heart he doesn't have any more today. They are no fun to watch. It is hard to feel so powerless in their midst.

And just as I was editing this post, Calvin woke from a nap to a third partial complex seizure. He rubbed his eyes and began to tremble. His lips and face went pale, his breathing shallowed. I gave him half a milliliter of CBD oil rectally. The seizure stopped immediately. He is already asleep again. I hesitate giving him any more medicine because it is within the realm of possibility too much will cause him to have the fits. But my gut says epilepsy is the culprit, and perhaps, too, the ugly remnants of benzos—now gone—that for years were in his system. 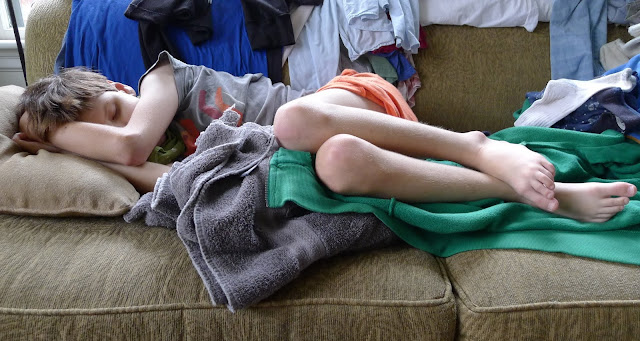 Posted by Christy Shake at 9:55 AM